Four Bolivian departments declared radical autonomy from the central power last weekend, rising fears of balkanization in the South American nation. The legislation, declared illegal by President Evo Morales, would insulate the wealthier eastern part of the country from parts of a controversial new constitution that grants greater powers to the country's central administration in La Paz. 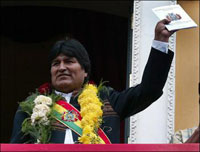 The gas-rich provinces of Santa Cruz de la Sierra and Tarija, as well as the Amazonian departments of Beni and Pando, said they want to have full autonomy from the central power to handle their earnings. On Saturday, tens of thousands of people took part in rallies in Santa Cruz and departmental capitals to celebrate the autonomy measures, while similarly large numbers of pro-government supporters demonstrated in favour of the new constitution in La Paz.

Leaders of the rebel departments have accused Mr. Morales of trying to settle an indigenous-communist rule in Bolivia, as the President promised an agrarian reform to redistribute lands. In return, members of the ruling Movement to Socialism party said the governors of these province are trying to lead the country to a civil war.

"I am convinced that we will not retreat a millimetre nor move one step to the side," Ruben Costas, the governor of Santa Cruz, told tens of thousands of jubilant supporters waving the department's green and white flags. Mr Costas warned the central government not to send in troops or police. "This is a warning. Do not dare to invade us or militarise us."

Mr Morales replied. He promised to "re-found" the Bolivian state in order to give a bigger say to Quechua, Aymara and other indigenous groups. Close to Venezuela's President Hugo Chávez, he is also committed to radical land reform, bringing him into conflict with the powerful soya and cattle interests of the eastern departments.

At a big rally in La Paz, he told supporters that "the people will never again be marginalised" and vowed to defend the country's unity. "We're not going to let anyone divide Bolivia," he added. "Bolivia is a nation among nations," he said Saturday, referring to the diversity of Indian nations whose traditions date back centuries. "We are not a country of blue-eyed, green-eyed folks only. It's a plurinational country made of dark-skinned and white-skinned. This new constitution will unite us."

Morales counts with the support of the poor majority of the country, including indigenous an labor groups living in the autonomist regions. However, he is quickly losing support from two other departments - Cochabamba and Chuquisaca – whose authorities are unhappy with the new constitution, railroaded through by an emergency session of a constituent assembly eight days ago by pro-government supporters. Heavily indigenous departments of La Paz, Potosi and Oruro remain loyal to the President.

All the legislation - as well as a separate and especially contentious constitutional provision limiting the size of landholdings - has to be submitted to referendums that are expected to take place early next year.