BUSH: Even though I’ve been proven wrong, I’m still right

Predictably, when caught in yet more lies, George Bush is disregarding and misrepresenting all the evidence that contradicts what he has been claiming for months. While knowingly spreading distortions and false information, it is reported that George Bush was told 4 months ago that the evidence regarding Iranian nuclear intentions was being re-examined, yet Bush continued to beat the drums of war. The US has been in tense relations with Iran since 1979. 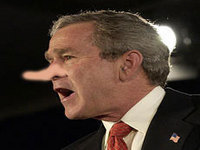 BUSH: Even though I’ve been proven wrong, I’m still right

National Security Adviser Stephen Hadley parroted Bush and did his best to spin the news, telling reporters that the NIE “confirms that we were right to be worried about Iran seeking to develop nuclear weapons.” Strange, because the NIE just said the exact opposite. The National Intelligence Estimate focused exclusively on Iran and Dick Cheney has been working feverishly behind the scenes ever since to keep the information secret. If that weren’t outrageous enough, John Bolton is now seeking a congressional investigation into US intelligence agencies, stating that the report was politicized by intelligence officials who have their own agenda.

Bolton is attempting to discredit anything that doesn’t support his crazed agenda for more war in the Middle East which is clearly a redux of his actions before the invasion and attack on Iraq.

At the time that President Putin was meeting with Mahmoud Ahmadinejad, Bush was heard ranting and saber rattling much the to dismay of the civilized world. He made a televised speech where he declared , "We've got a leader in Iran who has announced that he wants to destroy Israel," he said. "So I've told people that if you're interested in avoiding World War III, it seems like you ought to be interested in preventing them from having the knowledge necessary to make a nuclear weapon." He looks even more irrational and foolish now than he did then.

The U.S. National Intelligence Estimate (NIE) established in their report that Iran stopped their efforts to develop nuclear weapons in the fall of 2003 and that the program remains on hold, contradicting US claims that Tehran was working toward building a bomb. “We judge with high confidence that the halt lasted at least several years…We assess with moderate confidence Tehran had not restarted its nuclear weapons program as of mid-2007…

Tehran’s decision to halt its nuclear weapons program suggests it is less determined to develop nuclear weapons than we have been judging since 2005.” The conclusions of this assessment are likely to influence the tension-fraught negotiations and arm twisting aimed at getting Iran to halt its nuclear energy program. The assessment represents the consensus view of all 16 American spy agencies.

Mohamed El Baradei, Director General of the International Atomic Energy Agency (IAEA), also affirmed that the latest US intelligence report on Iran's nuclear activities was consistent with the organization's findings in recent years, findings that the US has continually ignored for its own purposes. "Although Iran still needs to clarify some important aspects of its past and present nuclear activities, the agency has no concrete evidence of an ongoing nuclear weapons program or undeclared nuclear facilities in Iran," El Baradei said in an official statement.

In referring to the assessment just released, Sergei Lavrov told reporters after a meeting with Condoleezza Rice at the NATO ministerial meeting, "It fully confirms the information that we have: that there is no military element in their nuclear program. We hope very much that these negotiations with Iran will continue." Lavrov has consistently affirmed that Russia has no evidence that Tehran has ever had a secret nuclear weapons program in violation of their international treaty obligations.

One has to literally cringe in absolute astonishment at Bush’s insane blathering when commenting on the recently released report. Bush declared, "To me, the NIE provides an opportunity for us to rally the international community, to continue to rally the community, to pressure the Iranian regime to suspend its program," he said. "I still feel strongly that Iran is a danger," Bush said. "I think the NIE makes it clear that Iran needs to be taken seriously as a threat to peace." Bush continues to refuse to rule out military options against Iran. His idea of “diplomacy” is the forceful imposition of inhuman sanctions and maniacal war threats insisting “all options are on the table."

From the very beginning, Iran’s President has been countering the accusations and affirming that Iran’s nuclear program is for peaceful purposes only, that Iran has no need for a bomb, nor did having the bomb accomplish anything positive for anyone else. He also stated that their nuclear program is very transparent. On US claims that Iran supports insurgents in Iraq, President Ahmadinejad also denied providing weapons or training saying that insecurity in the region was also very detrimental to Iranian interests.

Iranian Foreign Minister Manouchehr Mottaki welcomed the new information, "We naturally welcome those countries that had questions about Iran's nuclear case in the past and now correct their views realistically. The whole world is becoming to know that Iran's nuclear activities are peaceful," he added. Iranian Foreign Ministry spokesman Mohammad-Ali Hosseini, in a statement released to the media on Tuesday, also welcomed the U.S. intelligence report as "positive and factual."

“The report reflected the elaboration of 16 U.S. intelligent services and confirmed that Iran's nuclear program is peaceful and no violation is detected,” Hosseini said. “Therefore, the previous claims of U.S. officials turned out to be totally baseless,” He also added that bringing Iran's case to the UN Security Council had been "illegal" and that Washington should "pay the price" for its accusations against Tehran. Gholam-Hossein Elham, a spokesman for the Iranian government, said that the US has inflicted considerable damage on the Iranian nation by spreading lies against the country and by negatively affecting public opinion, therefore, they should have to pay the price for their actions.

Israelis were angered by the reports, but Ehud Olmert’s public statements echoed the mythical claims of Washington. Lying appears to be an established pattern among contemporary US administrations.

Recent developments prove that President Putin has been right all along in affirming Iran’s lack of interest in developing nuclear weapons and that the best policy is debate, discussion and dialogue rather than sanctions and threats of war. The Bush administration’s lies should be put to rest once and for all. They are no more capable of telling the truth than a leopard is capable of changing its spots. No intelligent, sane person can take their rants seriously especially in light of the fact that the empire remains a pernicious danger to all living things as flagrant violators of countless international laws and treaties. If you want to stop World War III, George Bush must first be stopped.

Mr. Bush, you are the one who is a danger and a threat to peace, and you are the one that the international community needs to deal with and deal with swiftly before you are allowed to do any further damage. You are a liar and a fraud of the highest order and the world would breathe a sigh of relief should you step down before your term of office has expired.