Perhaps one of our most treasured childhood companions and our first toy as a child, the teddy bear, evokes feelings of warmth and being loved…especially being loved by the person who gave this wonderful gift. While technically it is the image of an animal, that’s the last thing on the minds of most children. 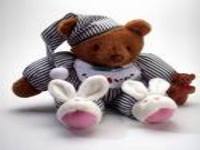 Look around anywhere and you will see images of smiling children and happy children clinging to their teddy bears and oftentimes even sleeping with their small, tiny arms around this symbol of love and security. This inanimate object often is even thought of as being “human” rather than part of the animal world and most children even have an endearing name given to their little friend. Very often they are clothed like people in all kinds of fancy outfits as well.

A court in Sudan found a British teacher guilty of insulting religion and sentenced her to 15 days in prison for allowing a teddy bear to be named "Mohammed.” The teacher was arrested after she asked her class of 7-year-olds in Khartoum to name the stuffed animal as part of a school project, the British Foreign Office said. She had faced charges under Article 125 of Sudan's constitution, the law relating to insulting religion and inciting hatred. The teacher could have possibly faced even a harsher sentence of 40 lashes, a fine or a jail term of up to a year.

The school has been closed until January for fear of reprisals. Ms. Gibbons may also be deported from Sudan after her prison term, according to her lawyer. He said that he was "very disappointed" with the verdict, but an appeal would not be filed. She was found not guilty on two other charges brought against her, inciting hatred and showing contempt for religious beliefs.

Although there is no ban in the Qur’an on images of the Prophet Mohammed, images are considered highly offensive by Muslims. As a result, thousands of angry protestors took to the streets of Khartoum calling for the execution of Ms. Gibbons. They burned newspapers bearing her pictures and called for her to face a firing squad for her "crime".

Ms. Gibbons is being held at a secret location in Khartoum for her own safety. Her son, John Gibbons, said his mother had appealed for tolerance in a telephone conversation yesterday. Gibbons said his mother appeared to be in good spirits after speaking with her by phone.

"She just doesn't want any resentment to Muslims," he said. "She doesn't want people using her and her case as something to stoke up resentment towards anyone, towards Sudanese people, towards Muslim people or whatever. That's not the type of person she is, that's not what she wants."

Ms. Gibbons has been working at the school since August, after leaving her position in a Liverpool, England school. Her fascination and passion for travel had led her to plan trips to troubled countries and she confessed to a feeling of wanderlust. Gibbons had asked the children to pick their favorite name for the new class mascot, which she was using to aid in lessons about animals and their habitats. Pupils had selected eight names including Abdullah, Hassan and Mohammad and then the children voted on a name. Twenty out of the 23 children chose Mohammad as their favorite name. One Muslim teacher at the independent school for Christian and Muslim children, who has a child in Ms Gibbons' class, said she had not found the project offensive. One Muslim man who lives in Italy said, “If she wanted to insult Islam why she went to teach in a Muslim country? I think people who arrested her made an exaggeration…”

The Christian Bible teaches that the greatest commandment is to love one another. It is said that the name of the Prophet is one of the most common first names in the world today. According to Shaikh Rashid Gannouchi on the rights of non-Muslims in a Muslim state, “What is not permitted to Muslims or non-Muslims is resort to violence or aggressively in resolving disputes or coercing others by compulsion to believe or disbelieve in this or that. In the Qur'an, it is stated: "Call unto the path of your Lord with wisdom and comely preaching. Dialogue with them with the more comely arguments." (Qur'an 16:25)”

Clearly this is a case of mutual cultural misunderstanding and all involved should step back and try to understand that there is no reason why hostility, hatred or bad feelings should be harbored or exacerbated and that a lesson can be learned to think before acting, to educate oneself and most of all to value the sensitivities and differences in others. Rather than creating hate or bad feelings, these differences make for a more interesting, colorful and beautiful world. It would be rather dull and monotonous if everyone were exactly the same.