It has been a couple of very active weeks in Venezuela prior to the December 2nd referendum and things are heating up in the campaign on constitutional reform. Last Sunday, a major march in favor of reform took place with a huge turnout of Chavez supporters. There were tens of thousands of pro-reform supporters in the streets of Caracas that marched 7 miles from Parque del Este to Avenida Bolivar to hear President Chavez speak. 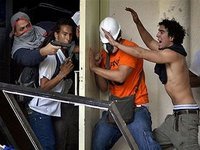 Most of the international media failed to report that event, but rather chose to spend their time with distortions and disinformation in their reporting on the small but extremely violent opposition student protests that continue to try to undermine and destabilize the country and provoke violence throughout the nation. The untold story is that the Venezuelan government has been doing everything in its power to allow these students to freely enjoy their rights to protest without letting them create chaos, destroy property or endanger the lives of citizens. Despite reports in the US media that student views are being silenced, opposition students have met with Venezuela's National Assembly, the Supreme Court and the National Electoral Council. Lawmakers invited them on several occasions to hear their concerns.

The protests that these students freely enjoy in Venezuela would NEVER be permitted in the US. How many citizens there have recently died or been injured as a result of the use of tasers or other forms of police brutality? Surely the US/Western media and their politicians are throwing stones from glass houses when they make fallacious and bogus allegations against Venezuela, referring to President Chavez as a “dictator” who tries to silence the people or who seeks to be “President for Life.”

If the law is not changed, President Chavez would have to leave office in 2013 . He was re-elected in a landslide a year ago with huge support. “Most Venezuelans want socialism,” Chavez said. “What I’m doing is calling upon them to help build it.” Chavez also predicted: "The empire has already hatched its plot. On Sunday, when the electoral commission announces the results I'm certain that they won't recognize them -- they are going to cry fraud and they are preparing violence," he said. "We will try to neutralize them."

The most recent poll of 1,600 voters taken November 21-27 indicates 60 percent of likely voters appeared set to vote for Chavez's constitutional changes and 40 percent set to vote against. The Consultores 30.11 poll had a margin of error of 2.16 percentage points. Seventy percent declared that they intend to vote. Most stated that they were hopeful about the country’s direction. Chavez's referendum includes some very appealing proposals, such as shortening the workday.

From the very beginning, the Venezuelan people have been encouraged to actively participate in debate, discussion and dialogue. The National Assembly solicited citizen views during more than 9,000 public events across the country and distributed the text of the proposed reforms to millions of voters. A hotline was established and received 80,000 calls offering critiques and suggestions.

Meanwhile, the numbers indicate that the reforms made by President Chavez are working. The economy has entered its fourth year of consecutive growth, poverty has fallen from 55.1% of the country in 2003 to 30.4% in 2006, and Venezuelans are the second most likely population in the region to call their government "very democratic." Venezuela is steadily establishing the basis for a new model of democracy, "socialism of the 21st century," one founded on equality for all in access to vital services such as healthcare and education. Voters will be asked to change 69 of the 350 articles in the constitution. Contrary to western media claims, President Chavez is not seeking to “increase his dictatorial powers,” but quite the contrary.

Below is a list of the most noteworthy portions of the Referendum.

- Create a Bolivarian armed forces and a socialist democracy

-Provides that all citizens have the right to equal access to the city's services or benefits. Also names Caracas, the capital, as the "Cradle of Simon Bolivar, the Liberator, and Queen of the Warairarepano" (an indigenous name for the mountain range surrounding Caracas)

-Prohibition against state financing of campaigns and parties, and prohibits foreign funding of political activity

-Establish councils of popular power (of communities, workers, students, farmers, fishermen, youth, women, etc.) as one of the main means for citizen participation in the government.

-Create a social security fund for the self-employed, in order to guarantee them a pension, vacation pay, sick pay, etc.

-Reduction of the workweek from 44 hours to 36 hours.

-Guarantees freedom for cultural creations, but without guaranteeing intellectual property.

-Right to a free education expanded from high school to university

-The state will promote a diversified and independent economic model, in which the interests of the community prevail over individual interests and that guarantee the social and material needs of the people. The state is no longer obliged to promote private enterprise.

-Monopolies are prohibited instead of merely being "not allowed." The state has the right to "reserve" the exploitation of natural resources or provision of services that are considered by the constitution or by a separate law to be strategic to the nation. Concessions granted to private parties must provide adequate benefits to the public.

-Introduces new forms of property, in addition to private property. The new forms are (1) public property, belonging to state bodies, (2) direct and indirect social property, belonging to the society in general, where indirect social property is administered by the state and direct is administered by particular communities, (3) collective property, which belongs to particular groups, (4) mixed property, which can be a combination of ownership of any of the previous five forms.

-Venezuela's foreign policy to be directed towards creating a “pluri-polar” world, free of hegemonies of any imperialist, colonial or neo-colonial power

-Strengthening of the mandate to unify Latin America, so as to achieve what Simon Bolivar called, "A Nation of Republics"

-Promote the active participation of the people, restoring power to the population

-Decentralization of power, by its transfer from state and municipal level to the communal level, will include the participation of communities in the management of public enterprises

As Venezuelans prepare to cast their votes Sunday to approve or reject the new constitutional reforms, more balanced and truthful reporting on the political situation in the country is absolutely essential. The corporate elitist media and the Bush administration all too often seem to parrot one another and they most likely will not approve of the results and will launch into their usual mantras about dictatorships and election irregularities.

In fact, they are already doing that. But they would do well to remain silent given their own dreadful human rights abuses at home and worldwide, their own patently conspicuous election irregularities, their wanton destruction of other nations in order to plunder their resources and their total disregard for international law. Venezuelans have the right to reform their constitution and to determine their own destiny and form of government without the moralizing or subversive interference of duplicitous hypocrites.