U.S. special services have warned about the new imminent danger. FBI agents said that al-Qaeda, the international terrorist network, had been working on large-scale terrorist acts during the recent two years. Al-Qaeda will strike the USA again in December of the current year, the FBI said. 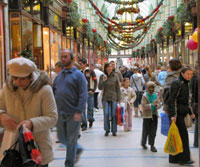 A recently published report says explosions may sound in large shopping malls of Chicago and Los Angeles. The terrorist acts, which al-Qaeda is going to conduct on Christmas Eve, are to undermine the U.S. economy, the report runs. The FBI obtained the information about the extremists’ plans in September, but the Bureau decided to make it public only now.

The report says that the threat is possible to occur, although the source from which the information was received cannot be trusted absolutely. Nevertheless, official spokespeople for the Federal Bureau of Investigation told reporters that the source proved reliable and trustworthy information in the past.

U.S. special services eventually decided that the American population should keep their vigilance during Christmas holidays.

Terrorist organizations regularly declare their readiness to conduct terrorist acts in places that enjoy popularity with common people. Shopping malls, for example, are an easy target for terrorists.

The FBI has repeatedly distributed such information before: last year on Christmas and New Year’s Eve and on the threshold of the 9/11 anniversary.

"Out of an abundance of caution, and for any number of other reasons, raw intelligence is regularly shared within the intelligence and law enforcement communities - even when the value of the information is unknown," FBI spokesman Richard Kolko said, adding that information-sharing has become a crucial component of national security efforts since the attacks of Sept. 11, 2001.

Kolko added that Al Qaeda had repeatedly made clear its intention to again attack the United States or its interests.
"As always, we remind people to remain vigilant and report suspicious activity to authorities," The Los Angeles Times quoted Kolko as saying.