Top-seeded Maria Sharapova earned her first title in 10 months with a 6-2, 3-6, 6-0 victory Sunday over Patty Schnyder in the final Acura Classic tournament. 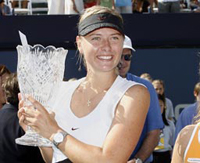 Sharapova used sharp groundstrokes in the first and third sets to capture her first championship since winning a WTA title at Linz, Austria, in October.

The No. 2 ranked player, who was the defending champion, dropped her first set of the tournament that had a 24-year run in the San Diego-area. Promoters sold the tournament rights back to the WTA Tour, which plans to relocate the event.

"It's always good to win a title," Sharapova said. "But to actually come back the year after and back it up is good."

Schnyder, the No. 11 seed, had no answers for Sharapova in the first set as her Russian opponent consistently hit the lines with forehands and backhands, the AP reports.

"It's always good to win a title," Sharapova said. "But to actually come back the year after and back it up is good."

Schnyder, the No. 11 seed, had no answers for Sharapova in the first set as her Russian opponent consistently hit the lines with forehands and backhands.

"In the first set, I felt like I hit some really good shots, especially when she was serving," Sharapova said. "It opened some doors for me."

Schnyder took the first game but failed to break Sharapova's serve by missing three break points in the following game. Then the game was totally controlled by the Russian who hit hard and finished in favor of Sharapova at 6-2, Xinhua reports.

After 29-year-old Schnyder took the second set with a score of 6-3, the rhythm of the match went again to Sharapova's when she made a light job by blanking the Swiss in six games, Xinhua reports.

Sharapova never looked back, breaking Schnyder to 4-0 with a blazing forehand and winning the match with another forehand winner.

"Once she's on a roll, she sticks with it doesn't give a chance," Schnyder said. "She puts pressure on you whenever she has break points and you have to save them.

"She's a champion and you know you have to come up with something special."

In the last year of the San Diego Classic, which has been sold to Beijing, Sharapova become the first woman to defend the title since Venus Williams in 2002.

"I know what happened last year when I won here and then went on to win the U.S. Open, so this gives me a lot of confidence," Sharapova said.

It was the world No. 2 Russian's first title since winning the Linz tournament in October.

"It's such a thin line," Sharapova said. "I'd rather be in a grand slam final then win a Tier IV tournament. I could easily play 30 tournaments a year like some of the other girls if I really wanted to win a tournament, but that's physically impossible for me.

"I play the big ones and the ones that count and that I feel that I'm ready for. If I didn't win one before this one, than so what, I've won plenty before."

Sharapova will be top seed at next week's Los Angeles Classic, Reuters reports.