Real Madrid signed Javier Saviola from FC Barcelona on Friday to cap a busy week for the Spanish champions. 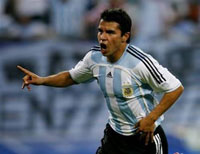 Madrid will field a new-look team to start its first title defense in four years. Saviola was the third new player to arrive at the Santiago Bernabeu stadium since Bernd Schuster was hired as coach on Monday to replace the fired Fabio Capello.

"I have great hopes, to play a lot, to move forward and succeed here," Saviola said. "It's a great opportunity in my career, and I didn't need to think one second more about taking it."

The 25-year-old Argentine, who was out of contract at Barcelona, turned down an extension to move to bitter rival Madrid, signing for four years.

"I don't feel anything," Saviola said about leaving Barcelona. "These are steps in the professional life of every footballer. Now, I'm at Real Madrid and happy to be here with all of the faith deposited in me by the club."

As Saviola was ushered through the doors of the Bernabeu, former "galactico" David Beckham was being led up the Hollywood red carpet as Major League Soccer's Los Angeles Galaxy welcomed its own "galaxico" signing.

For a club used to spending big to get the player it wants, President Ramon Calderon is leading it in a "new direction," moving away from predecessor Florentino Perez's "galactico" policy which brought Zinedine Zidane, Luis Figo, Ronaldo and Beckham to Madrid.

In the Calderon era, the club is looking to young talent from within.

Madrid extended the contracts of two 21-year-old defenders - Sergio Ramos and Miguel Torres - and 22-year-old striker Roberto Soldado to tie all three players to the club through at least 2012.

Still, it being Madrid, some cash had to be spent.

On Thursday, Calderon welcomed Pepe from FC Porto, the club's most expensive defensive signing at Ђ30 million (US$42 million).

Madrid isn't likely to stop there.

Porto forward Ricardo Quaresma, Feyenoord defender Royston Drenthe and Chelsea winger Arjen Robben are the latest players to be linked with the club.

AC Milan midfielder Kaka and Arsenal's Cesc Fabregas top Calderon's wish list, but both have said they are staying where they are.

With all of these new faces, some of the Madrid's regulars are being shown the exit door.

Midfielder Jose Antonio Reyes, who scored two goals in Madrid's title-clinching 3-1 win over Mallorca on the final day of last season, has returned to Arsenal.