Sochi continues its Olympic race for millions of euros

Tropical Guatemala will be the unlikely venue when the International Olympic Committee (IOC) picks the host of the 2014 Winter Games from a trio of bidding cities after a campaign in which no clear favourite has emerged. 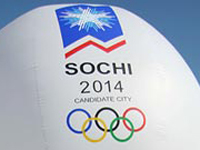 Sochi continues its Olympic race for millions of euros

South Korea's Pyeongchang, Austria's Salzburg and the Russian Black Sea resort of Sochi are running to stage the world's premier winter sports festival that could yield millions of euros for organizers and the winning city.

IOC President Jacques Rogge has predicted it would be as tight a race as in 2005 when London squeezed past Paris in the final round to win the 2012 Games.

"I suppose it will be very close. What really makes the difference is the confidence they (IOC members) have in the people," he said earlier this month. "The human factor will make the difference in the bids."

Yet when the 102 IOC members who are eligible to vote take to the ballots during the 119th IOC Session in Guatemala City on July 4, another set of issues could come into play.

Analysts have said the vote will determine what direction the IOC will take on Winter Olympics.

The city of Pyeongchang, in a province bordering North Korea, is seen as an IOC gateway to infiltrate further the vast Asian market following the Beijing Olympics next year, Reuters reports.

In a 2005 IOC session in Singapore, the presence of and enthusiastic lobbying by British Prime Minister Tony Blair played a key role in bringing the 2012 Summer Olympic Games to London, which was in close competition with the early front-runner Paris. Russia was the only country whose head of state failed to appear at the IOC meeting in Singapore at that time.

Among the IOC's 111 members, only 102 are allowed to cast ballots in the July 4 secret vote, as members from candidate cities are banned from participating. It is also likely that about 10 IOC members won't take part in the vote due to sickness and other personal reasons.

Bid-watching Web sites and press reports said the three candidate cities are locked in a neck-and-neck race as about 30 percent of IOC members are undecided as yet. They said the final presentations by the rival cities just ahead of the voting would sway the undecided.

Early this month, PyeongChang received the best overall review in an interim IOC evaluation report, but experts say it's still too early to predict the results.

PyeongChang, a small provincial ski town about 180 km east of Seoul, lost the 2003 competition for the 2010 Winter Games to Canada's Vancouver. In its campaign to win the bid, the city focused on expanding winter sports in Asia and promoting peace on the Korean Peninsulam, Yonhap reports.