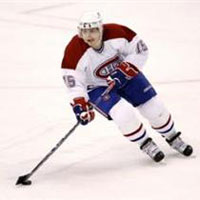 Samsonov appeared in 63 games for the Canadiens last season, recording nine goals and 17 assists. The 28-year-old Samsonov is a veteran of nine NHL seasons, having also played for Boston and Edmonton.

"We feel he has a lot left in the tank and playing under Denis Savard will bring out the offensive creativity that he has shown in the past," Blackhawks general manager Dale Tallon said Saturday.

Samsonov was a disappointment in his only year in Montreal. The former two-time 29-goal scorer was a healthy scratch in the season's last 13 games after he questioned whether he made the right move in signing with the Canadiens, and general manager Bob Gainey said after the season that Samsonov would not be coming back.

"Considering we didn't have plans for Sergei Samsonov in our organization for next season, our options were either to buy out his contact or to trade him in order to allow us to save valuable cap room over the next two seasons," Gainey said Saturday.

"We've been working on this a little bit to try to get some men to understand that they've got to put the machoism aside," Burns said. "Being a cancer patient myself, I know how important it is. "Men are a little but lazy when it comes to those things."

Burns' 13-year NHL coaching career was cut short during the 2003-04 playoffs when he was diagnosed with colon cancer. In 2005, the disease struck a second time, this time in his liver. The 55-year-old Montreal native had two major surgeries and chemotherapy, the AP reports.

The trade was little more than a salary dump for the Canadiens.

Cullimore, who played 52 games for Montreal in the mid-1990s, is set to earn $1.9 million next season and the Canadiens say they have agreed to buy out his contract.

Salmelainen earns $750,000 next year and the team says his situation will be evaluated in the coming weeks.

Cullimore had two goals and 12 assists in 118 games over the last two seasons with the Blackhawks. The six-foot-five, 220-pounder has 21 goals and 59 assists over 643 career games.

He won a Stanley Cup with the Tampa Bay Lightning in 2004.

Salmelainen, 25, had six goals and 11 assists in 57 games with the Blackhawks last season, Canada.com reports.