In the previous issues of our weekly we spoke about gastronomic preferences of Russia’s well-known writers, politicians, scientists and actors. Today we are going to find out what kind of food is normally at the table of our famous athletes. 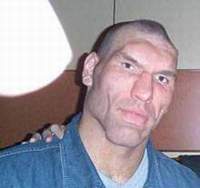 Add some garlic to keep the spirit up

According to history books on ancient Greece, it was thought that the less food an athlete or soldier ate, the stronger he would be. The so-called “black brew” or a soup made with cow’s blood and vinegar was the main course for sportsmen and warriors. Prior to taking part in the Olympics, the Greek athletes would eat only meat broth and a few cloves of garlic for “doping” themselves. Perhaps the meagerness of the Greek food was one of the reasons why the Greeks were eventually conquered by the Romans.

The attitudes toward food in connection with physical exercise have changed dramatically over the course of time. Experts concluded that plenty of would should be consumed to recover one’s strength after a strenuous exercise.

According to today’s medical recommendations, athletes are supposed to live on a diet that is twice or thrice as richer in calories as that recommended to non-athletes. A professional athlete’s daily ration must comprise at least two meat dishes and two dishes made with dairy products, vegetables and fruits. At a time of competition, athletes are served foods from a smorgasbord consisting of at least twenty varieties of salads and hot meals that always include ukha (a fish soup), ragout, and a mushroom soup. Dozens of cakes and pastries make up the final course.

Every athlete has his own little weaknesses when it comes to food. For instance, Vyacheslav Fetisov has a penchant for pickled cucumbers. Rumor has it he can eat up a five-liter jar of pickles at a time. The Olympic fencing champion Alexander Romankov cannot do without a daily bowl of his favorite pea soup. Below is the list of dishes to make up the day through the courtesy of Russia’s most illustrious athletes.

Porridge with orange garnish as favored by Alina Kabayeva

Legend has it that Alina Kabayeva used to drink about two liters of still mineral water in lieu of her breakfast, lunch and dinner. These days she can live on a strict diet of porridge, green salads, and some fish. Kabayeva reportedly eats nothing after 6 p.m. She opts for green tea with milk instead.

“I was a small child when we moved from Tashkent to Moscow. My mom used to bake cakes for a living. She has dozens of recipes for cakes. However, a chicken dish cooked according to an old Uzbek recipe is the most delicious meal served in our house,” said Kabayeva.

Kabayeva usually has porridge for breakfast. Her porridge is normally cooked of oatmeal boiled in water or milk and garnished with oranges. Crispbreads, a slice of cheese and tea with lemon are also on the breakfast table.

Ingredients for 4 servings: 2 oranges; 1.3 glass of oatmeal; 2 glasses of milk; 1/3 of a glass of raisins; a tablespoon of honey.

Pour hot over one of the oranges. Grate the orange peel and squeeze the juice. Peel the other orange and separate it into segments.

Put the grated peel, juice, oatmeal and milk into a saucepan. Bring to contents to the boil while stirring constantly. Simmer for one minute. Add raisins and honey. The dish to be served immediately in four large bowls garnished with orange segments.

Russia’s top tennis player once admitted that he preferred meals in a restaurant to homemade food. He got used to eating in restaurants because he has to travel a lot as a professional tennis player.

“The Japanese cuisine is very popular these days. I liked Japanese food very much when I tried it during my first trip to Japan. I like some dishes of the Italian cuisine as well. I’m a big fan of tagliatelle – egg noodles cut in long, flat pieces served with creamy cheese sauce. Speaking of the Russian cuisine, I just adore borsch and sweet dumplings with curd cheese,” said Marat Safin.

The stage one requires preparation of Dasi broth, for which you will need 4 glasses of water; a 6 cm long stick of dry laminaria (a water plant); 2 cloves of garlic and a teaspoon of ground ginger.

The laminaria should be cut into pieces and put into water. Add grated garlic and ginger and bring to the boil. Take the broth off the stove and allow it to settle for half an hour.

You are fully prepared to cook the soup now. You will need 3 glasses of the broth, 200 grams of salmon filet, 1 teaspoon of light soy sauce, scallion, lemon and salt. Rub salt into the filet. Let the filet absorb salt for five minutes. Rinse the filet and allow it to dry out. Then cut it into small pieces. Pour soy sauce into the warm Dasi broth and add a teaspoon of sake (use vodka in case sake is out of reach). Bring the contents to the boil, stirring often. Put the fish into the saucepan and simmer for 1 minute. Take the filet out of the saucepan, place servings into deep cups and fill them with the broth. Garnish the soup with tiny pieces of scallion and slices of lemon.

Nikolai Valuev, a heavyweight boxing champion from St. Petersburg, is very tall in stature and solid in build. His height is 213 cm and his weight is 150 kilos. He reportedly consumes about 3 kilos of meat a day. That is the reason why his typical lunch is full of meat dishes such as Argentinean beefsteaks, lamb chops, baked pork fore shanks, which are eaten with a variety of side dishes. However, Valuev steers clear of foods that do not agree with one another e.g. potato and meat.

Nikolai’s mother usually cooks his most favorite eats when he comes back home after winning yet another tournament. Since his childhood years, Nikolai has had a special liking for Olivier salad, borsch, blini with salmon roe filling, and syrniki, thick pancakes with cream cheese.

Put the beans in cold water and bring to the boil. Simmer for 20 minutes, discard water and fill the saucepan with fresh water. Cook gently for some time. Chop the shanks into small fragments and deep-fry them in fat. Put the shanks into another saucepan, and use the remainder of fat for frying finely cut onions. Add tomato puree and small particles of garlic. Pour in the water in which the beans were cooked; add some salt, a bay leaf and the deep-fried shanks. Cook at medium heat until the meat is ready. Cover the meat with beans and place the saucepan into the oven. Roast for 15 minutes.

The Olympic champion in gymnastics Alexei Nemov believes his mother-in-law is a treasure. The mother of his wife is an excellent cook. Moreover, she also passed down her cooking skills to her daughter. “I love all kinds of food. However, I’m especially fond of dishes made with fish. I don’t mean some exotic seafood. I’m into traditional recipes, something plain and tasty with no frills on it. I’d have a couple of beers to wash my fish down. Needless to say, my favorite crab and green apple salad tops the list,” said Nemov.

Cooking instructions for a crab salad

Remove the shells of five hard-boiled eggs and separate the yolks from the whites. Grate the whites. Place the whites into a large bowl, and spread the shreds of an onion over the whites. Add 100 grams of grated cheese and 50 grams of butter. Cover with a thin layer of mayonnaise. Cut 250 grams of crab flesh into fine sticks and put them above the mayonnaise. Then grate an apple and place the bits into the bowl. Add more mayonnaise. Allow to settle for 20 minutes. To top it off, garnish the salad with crushed yolks.