World number two Maria Sharapova advanced to the semi-finals of the French Open for the first time by brushing aside fellow 20-year-old Russian Anna Chakvetadze 6-3 6-4 on Tuesday. 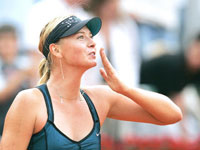 Second seed Sharapova, who feels more at ease on faster surfaces and had never gone beyond the quarter-finals on four previous visits to Roland Garros, needed just 78 minutes to beat her compatriot, seeded ninth.

Chakvetadze, who lost to Sharapova in the quarter-finals of this year's Australian Open, bowed out by firing a backhand return wide on the first match point.

Former Wimbledon champion Sharapova, who is hampered by a sore shoulder and said here she felt like a "cow on ice" on clay, will face Serbia's Ana Ivanovic for a place in the final, Reuters reports.

Maria Sharapova saved two match points on Sunday and advanced to the quarter-finals at the French Open by beating Patty Schnyder of Switzerland 3-6, 6-4, 9-7.

Schnyder served for the match three times, at 5-4, 6-5 and 7-6 in the third set. She was one point away from ending the match in the 10th game and again in the 14th -- and she was also two points away from victory on 11 occasions.

When the 14th-seeded Schnyder sailed a forehand wide to get broken again, Sharapova covered her face with both hands and looked on the verge of tears. As both players met at the net, there was a mix of boos and applause.

"It's pretty hard being a tennis player and Mother Teresa at the same time," Sharapova said. "You're fighting for every single point out there."

Sharapova pumped her fist and screamed encouragement to herself throughout the third set at Roland Garros.

In the 15th game, Sharapova won a disputed point when serving at 30-love. Schnyder watched the serve land in the box, but complained she wasn't ready.

The chair umpire ruled the point would count, giving Sharapova her first ace of the tournament.

"I only saw her hand up when I finished the serve," Sharapova said.

Schnyder said that she was distracted on that point, but then gave credit to the two-time Grand Slam champion for the comeback, the AP reports.