Sharapova advances to third round at French Open

Russia's second seed Maria Sharapova was hardly tested before overcoming American Jill Craybas 6-2, 6-1 to make the third round at the French Open on Thursday. 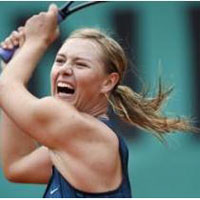 Sharapova advances to third round at French Open

The 20-year-old, who is still suffering a shoulder injury, proved to be in a different league than her American opponent, notching up the win in one hour or so.

Sharapova has competed in just five tournaments this year, because of shoulder and hamstring injuries, and comes to Paris having played only one tune-up event; reaching the semifinals in Istanbul last week.

Elsewhere, 2002 French Open winner Serena Williams from the United States fought off a late charge from Milagros Sequera of Venezuela to win at 6-0, 7-6(3) in a weather-delayed match.

"It was weird. I didn't feel like I played my best tennis throughout the whole match. I was kind of struggling out there to et the rhythm. Maybe because I had too many days off," the eighth seed said.

The Indian was strong on service and forehand but was let down badly by a very weak backhand.

There was also second round win for 14th seed Patty Schnyder from Swiss, who overcame Katerina Bondarenko of Ukraine 6-3, 6-2, Xinhua reports.

She was joined in the last 32 by Serena Williams who was once again caught napping before she regained her focus to set up a third-round date with one of her biggest fans on the tour.

Williams squeezed past little-known Venezuelan Milagros Sequera 6-0 7-6 and will next run into Dutch teenager Michaella Krajicek.

The younger sister of 1996 Wimbledon champion Richard Krajicek said she was excited about meeting Williams as she had idolised the American while growing up.

"That's awesome. That's so sweet," said Williams, seeking a second title here after her success in 2002.

"I know the feeling because I loved Monica Seles, so whenever I got a chance to play her, I was just still really excited. Winning against her was like the ultimate goal. Every time was just so cool.

"It's just kind of strange to be in the opposite position."

The Australian Open champion, however, will want Krajicek to be struck by stage fright after she produced yet another ragged performance on Thursday.

Williams had been dragged to three sets in her opening match on Sunday and a three-day break did little to restore her usual champion's aura.

The eighth seed stormed through the first set in 24 minutes but then started misfiring as her 69th ranked opponent streaked to a 3-0 lead in the second.

Williams, 25, found her footing in the nick of time to avoid another long-winded contest and sealed victory 7-3 in the tiebreak when Sequera slapped a forehand long.

"I pretty much went crazy. It was weird. I honestly didn't feel my game at all today," said Williams, whose match was postponed from Wednesday because of downpours over Roland Garros.

"Even when I was up 6-0, I didn't feel like I was playing my best tennis. I was kind of struggling out there to get the rhythm. Maybe because I had too many days off, Reuters reports.