Kournikova dumps Iglesias because of children 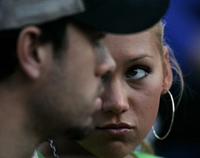 Kournikova dumps Iglesias because of children

Britain's The Sun reported Enrique had confirmed the high profile couple had split during an interview.

"We've split. I'm single now and it's okay. I don't mind being single," he said.

The pair began dating after Russian-born Anna, 25, starred in a video for Enrique's song Escape in 2002.

Rumours about marriage have dogged the pair, and became stronger after Anna was spotted sporting a huge diamond ring recently.

The Sun reported the couple's different views on having children may have been a factor.

"I'm not ready for children," Enrique said. "I dont feel like taking on such a responsibility yet. But in the future I'd like two children."

Enrique is currently in Sweden doing interviews to promote his new album.

Anna reportedly reacted to the split by hitting the nighclubs in Las Vegas.

Anna was a high profile tennis player until she retired in 2003 after a string of injuries.

Her highest world ranking was No. 8 in singles, but she gained the world No. 1 ranking for doubles several times.