Chelsea striker Andriy Shevchenko's management company has played down the significance of an invitation from AC Milan for the Ukrainian to attend Wednesday's Champions League final in Athens as their guest. 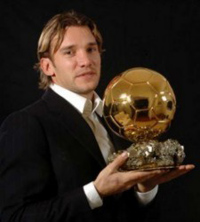 Shevchenko has been linked with a move back to the Italian club, where he spent seven successful years, after failing to live up to expectations in his first season in the Premier League.

"Andriy is not in talks of any kind with AC Milan," said a WMG spokesperson in a statement. "He has a contract with Chelsea and that is the end of the matter.

"AC Milan has invited a whole host of former players to this showpiece match and Andriy is just one of those players. There is nothing else to it and he will decide whether to attend tomorrow."

AC Milan vice president Adriano Galliani said this month that a space would be kept open in the squad for the player should he decide to return to the Italian side, Reuters reports.

Shevchenko himself had insisted that he wants another chance to prove himself, but it appears that neither Mourinho nor the striker seem keen to work with the other. The Portuguese has already been confirmed by the Blues board for next season, leaving Sheva on the outer.

The Sun claim that Abramovich is now open to a Milan return for the Ukrainian, but under no circumstances on loan. They are looking at a cash plus player deal, making sure they recover the £30 million they spent in the summer, or as close to that as possible.

Kakha Kaladze has been one of the many players mentioned. The Athens meet is expected to help iron out the issue, following which Chelsea will meet the player's agent to discuss possibilities.

It is expected that the Blues will up the ante for David Villa - who will complement Drogba better, and who impressed Mourinho during the Champions League quarter-final clash against Valencia - should Shevchenko's departure be confirmed, goal.com reports.