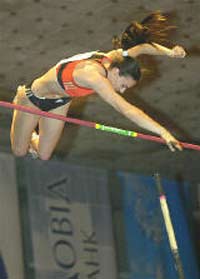 And in August she won the gold medal at the European Championships in Gothenburg with a Championship record of 4.80m.

She tried three times to achieve new world record of 5.02m but failed although rounded off her season by taking the World Cup in Athens.

Her only defeat of the year came in the Super Grand Prix meeting in Stockholm with Poland's Monika Pyrek causing the big upset.

Isinbayeva said she was delighted to be given recognition for her achievements after three nominations for the award, eurosport.com reports.

"I've been so disappointed for the last two years because I was sure I would win, but this time I've done it," said the Olympic champion.

"Winning it was always a dream of mine and now this dream has come true."

Serena Williams won the comeback of the year award for winning the Australian Open after a long injury layoff.

French tennis player Amelie Mauresmo took the breakthrough of the year award for winning her first grand slam titles last year at the Australian Open and Wimbledon, the AP reports.