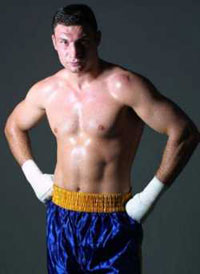 "Klitschko has already fought 50 bouts. You cannot ignore so much experience," Steward said at a news conference attended by both boxers in Heidelberg.

Klitschko, 30, who has a 47-3 record with 40 knockouts, said he was looking to finish the fight in the Mannheim SAP Arena early against his 36-year-old opponent.

"The earlier I win the better it will be for me," he said. "I'm on the right road but I haven't reached my goal yet. It's one thing being a world title holder but being a champion is something else."

Klitschko starts the favourite but won't enjoy the huge size advantage he enjoyed over some previous opponents including US fighter Chris Byrd whom he beat in Mannheim for the IBF belt last April, inform.kz says.

Ray Austin and Wladimir Klitschko are the same height, with just about the same reach. Austin figures that will work in his favor when the two fight Saturday for Klitschko's IBF heavyweight title.

Both fighters are 6-foot-6. Klitschko's reach is 81 inches, about an inch more than that of Austin.

"Klitschko has a history of having problems with taller, heavier heavyweights," Austin's trainer, Stacey McKinely, said. "They're going to weigh about the same, have the same reach and share the same height. Ray Austin is a dangerous man in the condition he is in today."

Klitschko did not sound concerned, the AP reports.

"Height does not make a difference during the fight. This subject is addressed in the training leading up to the fight," he said.

Emanuel Steward, Klitschko's trainer, said the Ukrainian fighter had a lot of respect for Austin -- "more than Ray apparently has for Wlad judging by his comments at the first press conference."

"After one minute of the first round everything will change for Ray Austin when he realizes who he is in the ring with," Steward said. "Wladimir is on a different level and at age 30, he's already entering his 51st fight."