Dutch soccer coach Guus Hiddink was convicted Tuesday of tax evasion, fined €45,000 (US$60,000) and given a six-month suspended prison sentence. He will not serve any time behind bars. 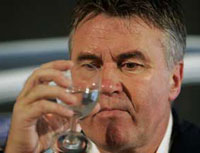 Prosecutors had sought a 10-month prison sentence, but judges at a court in the central city of Den Bosch said there were mitigating factors, including damage already done to Hiddink's reputation by publicity surrounding the case.

According to prosecutors, Hiddink evaded paying €1.4 million (US$1.8 million) in Dutch taxes by claiming a tax home in Belgium when he was actually living in Eindhoven in 2002-2003.

Hiddink's lawyers argued that his financial adviser had told Hiddink claiming a tax home in Belgium was legitimate, since he does own a home there.

Hiddink coached South Korea to a surprise semifinal spot at the 2002 World Cup before moving to PSV Eindhoven later that year. He coached Australia at last year's World Cup before taking up his current post in Russia.

Hiddink's case came to the attention of Dutch tax fraud inspectors after telephone conversations with a former PSV director were monitored by wire taps in a criminal investigation into the PSV director some years ago.

During the trial Hiddink admitted that he never spent a night in his house in Belgium but also denied that he lived with his girlfriend in Amsterdam.

He said he had instead slept in a number of different places -- in hotels, at his girlfriend's home, at the training ground of PSV Eindhoven, whom he was also coaching at the time, and sometimes even behind the wheel of his car, Reuters reports.