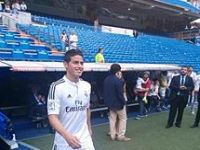 James Rodríguez, the Colombian forward, becomes the fourth most expensive transfer in the history of soccer, moving from Monaco to Real Madrid for a price of 121 million USD, after Barcelona signed Uruguay's Luis Suarez from Liverpool FC for 128 million USD.

James Rodriguez, 23 years of age, was the top goal scorer in the FIFA 2014 World Cup in Brazil, winning the tournament's Golden Boot with six goals in five games. Before that he won three Portuguese league titles with Futebol Clube do Porto, moving to Monaco in France for a fee of 365.5 million USD in 2013.

Real Madrid have also signed Germany's midfield player Tony Kroos from Bayern Munich for an undisclosed fee, rumoured to be in the region of some 50 million USD.