Any three of the top teams (CSKA Moskva, Zenit Saint Petersburg and Lokomotiv Moskva) could have won the Russian Premier League. In an exciting finish to the season, CSKA stormed over the line in first place, leaving André Villas-Boas at Zenit with a very bitter taste in his mouth. Leonid Slutsky does it again! 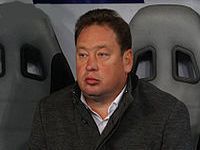 André Villas-Boas needed a win and a draw. He got the win for Zenit at Kuban - 4-1 away but in the match between CSKA Moskva and Lokomotiv, the home side came out winners, by 1-0 and CSKA is champion for the twelfth time.

Manchester City (86) regains the Premier League title with a 2-0 win against West Ham United; Liverpool (84) is second, after winning at home 2-1 against Newcastle United; third is Chelsea (82), 2-1 victor at Cardiff City and fourth, Arsenal, winning 2-0 at Norwich City (relegated). Van Gaal takes the reins at Manchester United with a three-year contract. Ryan Giggs will be his assistant coach.

Bayern finished the season with a victory over Stuttgart (1-0) and have 90 points; Borussia Dortmund (71) won 4-0 in Berlin at Hertha's stadium and FC Schalke 04 (64) beat Nürnberg 4-1 in Gelsenkirchen.

Serie A (After 38 matches - Final result)

Juventus 3 Cagliari 0; Genova 1 Roma 0; Napoli 5 Verona 1. No change at the top on the last day of the season, with Juventus' victory a foregone conclusion.

Fenerbahçe (74 points) won the Turkish league ahead of Galatasaray AS (65) and Besiktas JK (62).

In Azerbaijan, after 36 games (Final result) the Championship belongs to Qarabag with 72 points, Inter Baki PIK is second, with 67 points. Qäbälä is third, with 61.