All three top teams won in La Liga, there is a change at the top of the Premier League, with Mourinho claiming that Chelsea has probably lost the race, while in Italy Napoli beat leaders Juventus but without creating any change at the top of Serie A. Bayern have already started celebrating the Bundesliga as the leagues pull into the final straight. 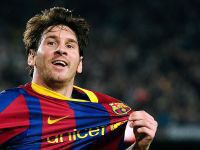 FC Lokomotiv Moskva is top with 48 points, now just one ahead of Zenit, followed by Moscow teams Dinamo and CSKA, both with 43. Lokomotiv was held at home by Spartak Moskva, Zenit won away at Amkar (Perm) 2-1; Dinamo won 3-1 at Tom (Tomsk) and CSKA received and beat Volga by 3-0.

The top three winning their matches, Real put an end to a disastrous week which saw the laders slip down to third place, losing six points in two games. Atlético is top on 76 points, one more than Barcelona, while Real Madrid now has 73. Atlético went to Athletic (Bilbao) and won 2-1; Barça won the Barclona derby at Espanyol, 1-0 (Messi, penalty after 77 minutes); Real thrashed Rayo Vallecano 5-0 with a brace of goals from Gareth Bale, and one each from Ronaldo, Carvajal and Morata.

Chelsea goes from top to flop, Mourinho admitting the title hopes are now dashed after a 1-0 defeat at Crystal palace. Liverpool FC took faull advantage of Chelsea's slip-up, winning at home against Tottenham Hotspur 4-0. Liverpool have 71 points, Chelsea just two points behind on 69. Manchester City, with two games in hand, are on 67 after the 1-1 draw at Arsenal.

Paris Saint-Germain won 1-0 at Nice, Monaco lost 1-0 at Évian, Lille won 1-0 against Guincamp. PSG has 76 points, thirteen more than Monaco and Lille is third on 57.

FC Porto continues to suffer from the loss of João Moutinho, James Rodriguez and Lucho Gonzalez and while it is the European club with the third highest return from the sale of players this season, and fighting on three fronts (Europa League, Portuguese Cup semi-finalists with advantage over Benfica, and Portuguese League Cup semi-finalists) the title is all but lost. Benfica is top with 64 points, Sporting second on 57 and FC Porto way back in third on 49.

Benfica had a good away win over Braga, Sporting beat Guimarães in Lisbon 1-0, while FC Porto lost to their bogey team, Nacional, in Madeira, by 2-1.

is second with 50 and Galatasaray AS third also on 50 points.

In Azerbaijan, after 28 games the Championship is led by Qarabag with 61 points, Neftci PFK is second with 51.