Leonel Messi added three goals to his club record in the 4-3 win at arch rivals Real Madrid, leaving Barcelona just one point behind Real and Atlético in a nail-biting finish to La Liga, arguably the strongest league of the moment in UEFA. Messi won the duel with Cristiano Ronaldo (1 goal) and urges his team to fight all the way to the end. 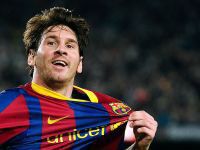 FC Lokomotiv Moskva, six points clear on 47 after beating Ural 3-0; second is Zenit on 44, 2-1 winners over Krylya Sovetov. Third, CSKA Moskva on 43 (3-0 winners at Anzhi Makhachkala; fourth is Spartak Moskva, 40 points, who did themselves no favours with a 4-0 trouncing at Krasnodar and fifth, with 40 points, is Dinamo Moskva, after a goalless home draw against Rubin Kazan.

Atlético de Madrid, 2-0 winner at Betis in Seville, is first after the thriller at Real's stadium against Barcelona (3-4). Atlético and Real have 70 points, Barcelona has 69 and is right back in the race.

Three games, 20 goals. Chelsea thrashed Arsenal 6-0, ruining Arsene Wenger's 1,000 match with the Gunners. Chelsea leads with 69 points from 31 games. Second is Liverpool (30 games, 65 points), after the 6-3 win away at Cardiff City in Wales. Third is Manchester City with 28 games and 63 points (5-0 winners over Fulham) and fourth now is Arsenal, 30 games and 62 points.

Bayern Munich has 74 points, after the 2-0 away win at Mainz; second is Borussia Dortmund with 51 (3-0 winners at Hannover) and third is Schalke, who received Braunschweig in Gelsenkirchen and won 3-1.

Juve leads on78 points. Second is AS Roma (64 points, 1 game in hand), third is Napoli (58). Juventus beat Catania away 1-0, the goal coming from Carlos Tevez, Roma won away at Chievo 2-0 and Napoli lost at home 1-0 to Fiorentina.

Paris Saint-Germain has a ten-point lead at the top, 73 points to AS Monaco's 63. LOSC Lille is third with 54. PSG won away in Brittany at Lorient (1-0) while Monaco was held at home by Lille in a 1-1 draw.

Wins for the top three in Portugal means no change at the top. Benfica leads with 61 points, Sporting is second with 54 and FC Porto (having a disastrous season) is third with 49. Benfica beat Académica (Coimbra) 3-0, Sporting won at Marítimo in Madeira 3-1 and FC Porto beat Belenenses 1-0.

Fenerbahçe (57 points, one game in hand) leads the Turkish league. Besiktas JK is second with 50 and Galatasaray AS third on 49.

In Azerbaijan, after 27 games the Championship is led by Qarabag with 58 points, Neftci PFK is second with 48.

In Armenia FC Ararat leads, 4 points clear, with 35 points from 18 games, ahead of FC Banants (31) and FC Shirak (29) who both closed the gap with victories while FC Ararat drew.