Leonel Messi has beaten a club scoring record and is today the greatest all-time scorer at Barcelona Football Club, firing a hat-trick in the 7-0 win over Osasuna, reaching 370 goals, one more than the legendary Filipino-Spaniard Paulino Alcántara, who scored 369 for Barça between 1918 and 1927. 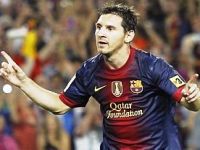 Russian Premier League (After 21 matches)
FC Lokomotiv Moskva sits on top of the Russian premier League after the winter recess and has 44 points from 21 games, followed by Zenit Saint Petersburg (41), Spartak Moskva on 40 and Dinamo Moskva (21 games, 39 points). None of the top teams won this weekend. Lokomotiv was held to a goalless draw at Amkar (Perm), Zenit lost 1-0 in Moscow with CSKA, Spartak drew 2-2 at home with Anzhi Makhachkala and Dinamo drew 1-1 at Kuban.

La Liga (After 28 matches)
Real Madrid (70 points) is three points clear at the top of La Liga after an away win at Málaga - Cristiano Ronaldo scored the only goal. Atlético is second on 67, after winning at home against Espanyol (1-0) while Barcelona is third on 66 points, after thrashing Osasuna 7-0 with a hat-trick from Messi.

Premiership (After 30 matches)
Chelsea (66), Liverpool (62, one game in hand), Arsenal (62, one game in hand), Manchester City (60, three games in hand). A bad weekend for Chelsea, which lost three points while all the main rivals chalked up wins. Chelsea went down 1-0 at Aston Villa, Liverpool went to Old Trafford and won 3-0 against Manchester United; Arsenal beat Tottenham Hotspur in the North London derby (Rosicky scored a blinder after 2') and Manchester City won 2-0 away at Hull.

Bundesliga (After 25 matches)
Bayern Munich is twenty-three points clear at the top with 71 points. Second is Borussia Dortmund (48), and third FC Schalke 04 (47). Bayern beat Leverkusen 2-1, while Borussia Dortmund fell further behind by losing at home 1-2 with Moenchengladbach. Schalke won 2-1 at Augsburg.

Ligue 1 (After 29 matches)
PSG leads with 70 points, eight points clear of second-placed AS Monaco, while LOSC Lille hold third place with 53 points. Ibrahimovic scored both of PSG's goals against Saint-Étienne (2-0); Monaco won 3-2 at Lyon and Lille was held at home in a goalless draw by Nantes.

Primeira Liga (After 23 matches)
Clash of the weekend was at Sporting CP's Alvaláxia stadium in Lisbon, where the home team defeated FC Porto 1-0. On Monday night the leader Benfica played away in Madeira at Nacional's ground, the result being 2-4, victory for Benfica. Benfica leads on 58 points; Sporting is second with 51 and FC Porto has 46 in third place.

Turkish League (After 24 matches)
Fenerbahçe (54 points) leads the Turkish league. Galatasaray AS is second with 49 and Besiktas JK third on 47.

In Azerbaijan, after 26 games the Championship is led by Qarabag with 55 points, Neftci PFK is second with 45 and Qabala is third with 44 points.