Soccer: How they stand

The English Premiership is perhaps the hottest league at the moment with a resurgent Arsenal, a free-scoring Manchester City, a rejuvenated Chelsea (Mourinho factor), a Liverpool improving weekly under new manager Rogers, and not far behind, an Everton making the most of a limited budget, while Newcastle United, Manchester United and Tottenham Hotspur are not far off the scent of the pack. 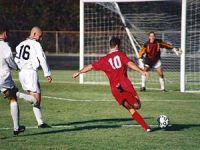 Arsenal (39) go into the New Year matches in England ahead of rivals Manchester City (38), Chelsea (37) and Liverpool (36), in one of the hottest seasons so far in the Premiership. Arsenal went to West Ham and came away with a 3-1 win, Manchester City beat Liverpool 2-1 in the Etihad Stadium and Chelsea beat Swansea City 1-0.

It's Barça and the two Madrid clubs (Atlético and Real) as the Spanish Primera Liga hits the New Year. Barcelona has 46 points, equaled by Atlético de Madrid, while Real Madrid has 41. Barcelona thrashed Getafe away 5-2, Atlético beat Levante 3-2 in Madrid and Real went to Valencia to win 3-2.

Borussia Mönchengladbach (33) overtakes Dortmund (32), now in a race for second place together with Bayer Leverkusen (37) given that Bayern Munich (44) has a seven-point lead at the top of the Bundesliga... with a game in hand. Leverkusen went down 1-0 at Bremen, Borussia Mönchengladbach drew 2-2 at home with fifth-placed Wolfsburg, while Dortmund fell further behind, losing 2-1 at home to Hertha Berlin.

Paris Saint-Germain leads on 44 points, ahead of AS Monaco FC (41), one point ahead of LOSC Lille. PSG drew 2-2 at home with Lille, while Monaco failed to take advantage, losing at home 2-1 with Valenciennes.

The Russian Premier is hot, hot, hot. Zenit recovered with a 2-1 win over Ural and is equal first (40 points) with Lokomotiv (drawless home game with Rubin). Spartak Moskva is third with 39 points (1-0 winner at Rostov).  Dinamo Moskva (35) beat Amkar 2-0 in Moscow, while CSKA (34) lost 1-0 at Krasnodar.

Fenerbahçe leads the Turkish league increasing the gap to seven points (38) over Kasimpasa SK with a game in hand.

In Armenia FC Ararat leads, 8 points clear, with 30 points from 14 games; in Azerbaijan, Qarabag leads with 36 points from 18 games, one ahead of Qäbälä; in Belarus after 32 games, BATE Borisov is the Champion. In Kazakhstan, FC Aktobe is champion.

In Ukraine after 18 games, the top spot belongs to Shakhtar Donetsk (41 points), five points ahead of Dynamo Kyiv. Metalist Kharkiv (36) and Dnipro Dnipropetrovsk (35) follow in third and fourth place, both with a game in hand.