Russia has passport stamped for Brazil

Russia will be present in Brazil for the FIFA 2014 World Cup after getting the point needed away in Azerbaijan to qualify from Group F ahead of Portugal by one point (22 to 21). In the event Russia had a goal difference of plus 15 against Portugal's 11. Now the best 8 runners-up in UEFA will compete in the remaining four places in a play-off phase. 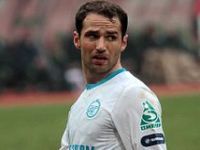 Shirokov placed the first goal in the net for Russia after 15' after a great pass from Samedov. Ten-man Azerbaijan leveled the game on 90' (Javadov).

Varela, Nani and Postiga scored Portugal's three goals but it was not enough.

FIFA has decided to seed the second-placed teams in order of their international ranking, so the eight teams playing in the play-off phase will be:

Iceland (54) is eliminated after a magnificent campaign in Group E. The play-offs will take place on November 15 and 19.