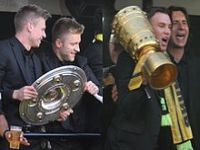 Maximum points for Barcelona (who beat Sevilla 3-2 at the Nou Camp) and Atlético Madrid (who received and beat Almeria 4-2). Villarreal (third place) drew at home 2-2 with fourth-placed Real Madrid.

Barcelona and Atlético have 12 points, Villarreal and Real have 10.

Arsenal and Tottenham, the north London duo, ended the weekend sitting atop England's Premier League with nine points each. Arsenal went away to Sunderland and returned with a 3-1 victory, while Spurs beat Norwich 2-0. However, Liverpool's 2-2 away draw at Swansea City FC put the Merseyside club top. Liverpool has 12 points.

In Germany, Borussia Dortmund thrashed Hamburg by six goals to two underlining the fact that it means business this season. Five games, five victories, fifteen points, fifteen goals scored and just four against. Dortmund faces Napoli tomorrow in the first round of the Group Phase of the Champions League. Bayerm Munich beat Hannover 2-0 and retain second place on 13 points while third belongs to Bayer 04 Leverkusen, 3-1 victor over Wolfsburg, on 12 points.

Serie A (After 3 matches)

SCC Napoli leads in Italy with a maximum 9 points from the first three games, the latest being a 2-0 win over Atalanta. Napoli shares top spot with Roma, 3-1 winners at Parma. Inter (third) and Juve (fourth), both with seven points, drew 1-1 in Milan, the same result between fifth-placed Fiorentina (7) and Cagliari.

AS Monaco is the leader of the French Ligue 1 isolated with 13 points after 5 games (1-0 winners over Lorient). Second is AS Saint-Étienne (3-1 away winner at Valenciennes) on 12 points, one ahead of PSG (2-0 winner at Bordeaux). Olympique de Marseille is fourth on 10 points after drawing 1 apiece at Toulouse.

In Portugal, FC Porto leads after four matches, beating Gil Vicente 2-0 and claiming the isolated leadership of the championship. 4 games, 4 wins, 12 points. Sporting CP is second after beating Olhanense 1-0 away in the Algarve (10 points) and third is Sporting de Braga (9 points), 3-2 winners over Estoril.

CSKA has 20 points, FC Zenit 17, the same as Spartak Moskva and Lokomotiv Moskva is fourth on 16. CSKA beat Rostov 1-0 in Moscow, Zenit beat Terek Grozny 2-0 in Saint Petersburg, Spartak travelled to Volga and won 1-0 and Lokomotiv received Kuban in the capital, winning 1-0.

In Armenia FC Pyunik and FC Mika lead with 9 points from five games; in Azerbaijan, Qarabag and Nefti lead with 13 points from 6 games; in Belarus after 23 games, Shakhtyor Soligorsk leads on 52 points, one ahead of BATE Borisov. After 26 games in Kazakhstan, FC Aktobe and FS Astana both have 30 points.

In Ukraine after 9 games, the top four are Metalist Kharkiv (23 points), Dnipro Dnipropetrovsk and Chornomorets Odesa on 20 points each and Shakhtar Donetsk (19),