Will Suarez stay at Liverpool?

Uruguay star striker Luis Suarez, 26, is attracting the attention of many clubs in the pre-season, among these being Arsenal FC, where manager Arsene Wenger has decided to improve his bid to 35 million pounds. The transfer activity is frantic as the drums beat for the start of the 2013-2014 soccer season, in the run-up to the 2014 World Cup in Brazil. 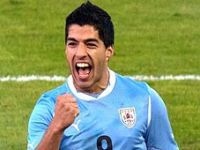 Among the signings at Liverpool is Steven Gerrard, whose 630 appearances make him one of the most experienced club players in the English Premiership - he is believed to be in negotiations for an extension deal with his club. Into Liverpool may be Bayern Munich winger Xherdan Shaqiri (21). Arsenal were also tracing Queen's Park Rangers' Brazilian goalkeeper Julio Cesar (33) but he seems to be linked to a move to Napoli in Italy's Serie A.

With Gareth Bale secured, Tottenham Hotspur FC, aiming for a top-four spot guaranteeing Champions League football in the following season, are looking for Alvaro Valdillo (18), the Real Betis winger and Nacer Chadli (23) the Twente winder, to join the attack.

From Spain to the Premiership, for a second spell, may be FC Barcelona's Cesc Fabregas, 26, who is interesting Manchester United FC manager David Moyes A fee of 25 million GBP has been mentioned. Wayne Rooney, 27, has been told that his situation will not be changing for at least 12 months, so the rumours that he will leave are unfounded. Neighbours City, promising attacking football this season, are trying to lure Fiorentina striker Stevan Jovetic (23) and Sevilla striker Alvaro Negredo (27) to bolster the attack.

Ryan Giggs has taken on a new role as player-coach at Manchester United, the club he joined at 16 years of age - now 39, he declared to the press that he is as happy there now as he was when he joined 23 years ago.