Mário Ballotelli, described by José Mourinho as "unmanageable" is back in Milan, Italy, this time with AC after leaving Manchester City under a cloud due to his abominable behavioural record. After City declared they might not need a substitute, now David Villa is linked with interest from Mancini's envoys. 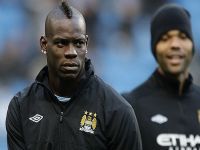 David Villa, 31, Barcelona's Spanish international forward, could be lining up at City as a substitute for the troublesome Ballotelli, little used this season by team coach Roberto Mancini. However, Arsenal have also been linked with a move for the experienced player.

Happy Redknapp, manager at Queen's Park Rangers, which got a point from City yesterday, has his eye on four players in the closing hours of the January transfer window: Razvan Rat, 31, left back from Shakhtar Donetsk; Peter Crouch, 31, England international forward, currently at Stoke City; Scott Parker, 32, midfielder (currently at Tottenham) and Nino Kranjcar, the 28-year-old Croatian midfield player. Going for experience to keep QPR up.

Also moving into the Premiership may be the Internacional player, Leandro Damião, a 23-year-old striker, to Tottenham Hotspur. While David Beckham sets tongues wagging with reported training sessions with Arsenal, Didier Drogba has set off an international soccer incident between Shanghai Shenhua (PR China) and Galatasaray (Turkey).

The direction of Shanghai Shenhua has declared it is shocked at the departure of Didier Drogba for Galatasaray, issuing the following statement:

"We understand that Drogba is anxious to play in th Champions League. On July 1, 2012, Shanghai Shenhua Football Club and Drogba signed, officially, a contract for a period of two and a half years. The club has respected the terms of the contract and has fulfilled the responsibilities and obligations it had. At this moment, Drogba is still a player of Shanghai Shenhua, the contract between the parties is still in force".

Shanghai Shenhua promises to fight tooth and nail against Galatasaray to retain the Cote d'Ivoire striker, who Galatasaray claim to have signed for the next two seasons.