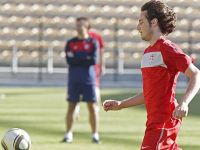 Chelsea FC is top with 13 points from 5 games (after beating Stoke City 1-0); second is United, 12 points after a 2-1 away win at Liverpool FC, followed by Everton (3-0 away win at Swansea City) and West Bromwich Albion (1-0 over Reading).

4 games. Juventus has broken away at the top, after a 2-0 victory over Chievo, maximum points: 12. The former top-runners Napoli and Lazio drew nil apiece with Catania (away) and Genoa (in Rome), respectively and are on ten points, one ahead of Sampdoria, on 9 points after a 1-1 draw with Torino.

Olympique de Marseille  points from 6 games with a 1-0 win at Nancy; Olympique Lyonnais is on 14 points after beating Ajaccio 2-0; PSG is now third with a 4-0 away thrashing of Bastia and FC Lorient shares the 12 points in fourth place with a home draw with Nice, 1-1.

Terek Grozny fell back this week. 9 games. First place goes to CSKA Moskva, 21 points, with a 3-2 win at Volga; Lokomotiv follows in second place on 19 points with a remarkable 3-0 win in Grozny over former leader Terek, third also on 19; Zenit is fourth on 17 after a 2-2 draw at Krylya Sovetov and Anzhi Makhachkala is fifth on 17 points also, after going down 3-2 at Dinamo Moskva.

In the Netherlands, FC Twente has 18 points from 6 games after a 1-0 victory over Heerenveen. In Ukraine, Shakhtiar Donetsk did not play this week and remains top with 27 points from 9 games. In Greece, Olympiacos has the maximum 12 points from 4 games after drubbing Panthrakikos 4-1.