Who are the Magnificent Sixteen coaches hopefully leading their teams to EURO 2012 glory? We take a look at their careers as players and managers and list the titles they have won. Among them are hundreds of years of soccer experience coursing through their veins. One will lift the trophy... 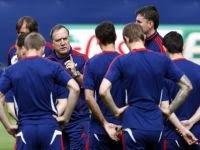 The Poland national team coach is Franciszek Smuda, 63 years old, 24 years in soccer management. After a career as a defender in Poland, the USA and Germany, he  moved into coaching and has worked with teams in Poland, Germany, Turkey and Cyprus.

Fernando Santos, Portuguese; 57 years old, 25 years as a soccer manager. A right back with Marítimo and Estoril, he turned to management in 1987 and coached Estoril, Estrela da Amadora and FC Porto in Portugal before moving to Greece, where he managed AEK Athens and Panathinaikos, then back to Portugal, to Sporting Cp, back to Greece for a second term with AEK, then the last of the Big Three in Portugal - SL Benfica, then three more years in Greece at PAOK, before taking over the national team in 2010.

Dick Advocaat. The Little General, 64 years old and 27 as a soccer coach, played as a defensive midfield player in the Netherlands and the USA before moving into management with Dutch amateur football team Door Samenwerking Verkregen Pijnacker (DSVP) then went on to amass a stunning collection of appointments at Haarlem, SVV, PSV, Glasgow Rangers (Scotland), Borussia Moenchengladbach (Germany), Zenit (Russia) and Alkmaar at club level, and at international level, two stints as assistant coach to the Netherlands, then two as national team coach, also United Arab Emirates, Republic of Korea (South), Belgium and Russia. He retires from Russia after the Euro and will go to PSV for a year.

Michal Bilek. 47 years old, 12 in management. A right-sided midfield player, his playing career was in Czechoslovakia and the Czech Republic and in Spain (Betis). He played 35 times for the national team, between 1987 and 1995. His coaching career took place mainly in the Czech Republic (Teplice, Chmel Blsany, Viktoria Plzen, Sparta Praha, Ruzomberok), also briefly with Cartaginés in Costa Rica and a spell with the Czech Under-19s, before being appointed national team coach in 2009.

Joachim Löw (52) was an attacking midfield player, in a career which started in 1978 and ended in 1995. he was the all-time leading goal-scorer for SC Freiburg and played at VfB Stuttgart, Eintracht Frankfurt, Karlsruher FC and later in his career, in Swiss clubs FC Schaffhausen and FC Winterthur. He made four appearances for the German Under-21s.

Paulo Bento (42), defensive midfield player. His playing career spanned 1987 to 2004, including Vitória Guimarães, Benfica, Oviedo (Spain) and Sporting CP. He made 35 appearances for the Portuguese national team between 1992 and 2002. As a coach he managed Sporting Juniors before becoming the first team coach (2005-2009) and from 2010, team manager, Portugal.

As a coach, Morten Olsen has managed Brondby IF, FC Köln, Ajax Amsterdam and cince 2000, Denmark.

Bert van Marwijk, 60 years old, 22 as manager. A forward who played 393 matches in the Dutch First Division (Eredivisie), he had one national cap. His clubs included Go Ahead Eagles, AZ 67, MVV Maastricht and Fortuna Sittard. He won a KNVB Cup and a First Division Championship. As a coach, he has worked at Maastricht, Herderen, Limmel, Fortuna Sittard, Feyenoord (2 spells), Borussia Dortmund (Germany) and since 2008, the Netherlands national team.

Cesare Prandelli. 54 years old, 19 in management. A midfield player at Cremonese, Atalanta and Juventus, he began his career in soccer management at Atalanta, then Lecce, Verona, Venezia, Parma, Roma and Fiorentina before being appointed Italian team manager in 2010.

Giovanni Trapattoni, 73 years old, 40 as manager. He had a playing career with AC Milan and Varese, with Milan winning all he could: 2 Italian Championships, 1 Italian Cup, 2 European Cups, 1 UEFA Cup Winners' Cup and 1 Intercontinental Cup.

43 years old, 11 as coach, Slaven Bilic is the Croatia manager. His playing career spanned Hajduk Split, Karlsruher SC, West Ham United, Everton. He played 44 times for Croatia from 1992 to 1999. His management career was spent at Hajduk Split, Croatia U21 and from 2006, Croatia as full team coach. After the tournament he will leave the Croatian team and join Lokomotiv Moskva.

Roy Hodgson. At sixty-four years of age and 36 of experience in soccer management, Roy Hodgson is one of the most experienced managers in the competition, second only to Ireland's Trapattoni. Another defender by trade, his career was in the minor leagues of English football. As a manager, it is impressive.

His management career started as soon as he finished playing (at Carshalton Athletic) with a contract at Halmstads BK (Sweden) from 1976-1980, a club which he saved from relegation to the second division and won the Swedish Championship in his first year (1976) and again in 1979 before moving to Bristol City (England). From 1980 to 1982 he stayed at the club as assistant manager then as manager, without success due to the club's poor financial position and in 1982 he moved back to Sweden, managing Oddevold (1982), Orebro (1983-1984) and then Malmo (1985-1989). There ensued five league championships (consecutive) and two Swedish Championships (separate competition) and two Swedish Cups.

In 1990, refusing a lifetime contract at Malmo, he moved to Switzerland to coach Neuchatel Xamax until 1992, when he took over the Swiss National Team, turning it into the third best national team in the world under his guidance. No mean achievement. He got Switzerland to the World Cup Finals in 1994 for the first time in nearly thirty years (1996 World Cup in England) and passed to the second round, losing against Spain and qualified for the UEFA Finals two years later (1996), leaving after qualification in 1995 to concentrate on the job he had already started at Internazionale Milano (1995-1997).

Rebuilding the team, he qualified twice for the UEFA Cup and in his second season led Inter to the final (where they lost against German side Schalke 04. In 1997 he spent a year at Blackburn Rovers, a team which he inherited in mid-table and took them to sixth and the UEFA Cup in his first season. He was sacked early in the second after a poor start which he blamed on injuries.

In 1999, he took over at Inter again as caretaker manager and then back in Switzerland, Grasshopper (1999-2000) then to Denmark. FC Copenhagen (2000-2001). One year, two trophies: Danish Superliga and Danish Super Cup. Missing out on being called to manage Austria and England (before Eriksson) he then went back to Italy to lowly Udinese (2001). Without results, he was sacked.

From there, he spent two years as manager of the United Arab Emirates national team, then a year in Norway with Viking, and from 2006-2007, was Finland National Team manager. Narrowly missing qualification (it would have been Finland's first) at the Euro 2008, he decided to leave voluntarily and moved to Fulham in the English Premier League (2007-2010), where he led the small London club to its highest ever League position - seventh and Europa League soccer - indeed reaching the final in 2010, being beaten by Atlético Madrid.

Voted LMA Manager of the Year 2010, he moved on to Liverpool FC where he spent a miserable six months beset by player power problems and from there, appointment at West Bromwich Albion ensured success- remaining in the Premier League in the first season and as he left, WBA was set to enjoy a third successive year in the Premier League for the first time.

He has only been in management for five years but has already won 1 French Championship, 1 League Cup and 2 Champions Trophies with Bordeaux and 1 French Manager of the Year title.

Danish manager of the Year

Norwegian Manager of the Year

Quarter finals of 2006 FIFA World Cup in his first term with Ukraine, the country's first appearance in this competition; he stepped down after failing to reach UEFA 2008 and was re-appointed in April 2011.