A perfectly legitimate Greek goal in the first half was disallowed for offside and here we have once again the hand of UEFA referees influencing games. The ensuing result was Czech Republic 2, Greece 1. The second game ended Poland 1 Russia 1, meaning a draw against Greece will guarantee a place in the quarter-finals. 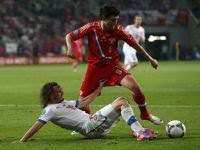 A flying start from the Czechs who would have gone home early if they had lost this game. 3': Petr Jiráček received a pass from Tomáš Hübschman in midfield which totally divided the Greek defence and midfield sectors and fired past the helpless Kostas Chalkias in goal.

6': Václav Pilar scored the second and his second in this competition after Gebre Selassie flew down the right and sent in a pass which Chalkias should have stopped. The ball ran on and Pilar was in position to slide it home.

Greece settled down and started to construct their game, but on 14' Pilar was again in a good position, firing wide from outside the area. 23' Chalkias, injured, came off, substituted by Michalis Sifakis, who saved a weak shot from Rosicky on 29'.

40' Greece scored a perfectly legitimate goal, Fotakis being ruled offside only God knows why. The second half belonged to Greece. The goal came on 53', with a cross from the left to the 6-yard area, where Petr Čech was presented with the chance to catch the ball and crash into his central defender, possibly creating a flashback to the horrendous injury when he cracked his skull, the result being a half-hearted attempt which saw the ball run through his hands and Gekas, thankful for the present, thumped it into the back of the net.

It was a game-changing moment. After this, it was a case of the Czechs watching the Greeks constructing attacks, but without the final result.

What an amazing first half of football. Poland started strongly and Malafeev did well to withstand the pressure of a free kick and a dangerous corner on 7'. Russia replied by building supported attacks; Poland then started to press more, goaded on by the home crowd in Warsaw and by 20 minutes, Russia was widening the front using the lateral players. By the half-hour Russia was clearly gaining control of the game and on 37' came Dzagoev's third goal of the competition.

Captain Arshavin took the free kick from the left, centred and Dzagoev flicked his header in. 1-0 to Russia, the score at half time.

In the second half, Poland reacted. Russian captain Arshavin was everywhere in attack, but marked out of the game and one such ineffective raid saw the ball fall to Poland, in a lighting counter-attack which on 57' saw the Polish captain "Kuba" Błaszczykowski fire the equaliser in, a left-foot shot from the edge of the area leaving Malafeev no chance at all.

68' Dzagoev created danger, but Russia more and more seemed happy with the draw - one hopes they did not stop believing in themselves.

Russia wins: passes to next round

Draw: Russia passes to next round

Greece wins: passes to next round if Poland draws with the Czech Republic

Poland wins: passes to next round

Poland loses: Czechs pass to next round