Columbian striker Radamel Falcao celebrates 29 goals in 29 games in the Europa League over two seasons, scoring a brace in last night's final over Athletic Bilbao, which Atlético Madrid won 3-0. After last year's win with FC Porto, Falcao is making the trophy his. Dinamo rue the chances they gave Rubin. 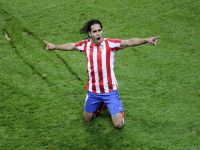 Atlético Madrid 3 Athletic Bilbao 0 was the final score at the end of the Europa League final last night in Bucharest, Romania. Falcao scored his brace in the first half after 7' and 34', then Diego scored the third and buried the game definitively on 85'.

Atlético Madrid pressures Athletic from the beginning of the match keeping up a frenetic level of football and competition which denotes excellent physical preparation against a young and promising Athletic side (average age just 24). Athletic get another chance on May 25 against Barcelona FC in the Spanish Cup (Copa del Rey).

Too much space given to FC Rubin Kazan on the edge of the area. This is the conclusion of Dynamo coach Sergei Silkin after Rubin won the Russian Cup on 78' with a long-range goal from Roman Yeryomenko. In the post-match press conference, Silkin stated: "It was a really tense fight until the first mistake, you could say. We started to let our opponents hit long shots, although we said at the start how important it was to close this zone down."

Rubin Kazan celebrate the first ever Russian Cup win. Team coach Kurban Berdyev stated after the game: "It was only the cup that was missing from our collection of all the silverware of Russia, and praise Allah, today it happened". Rubin was the Russian Champion in 2008 and 2009.