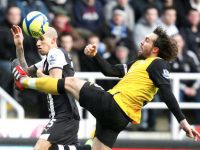 Manchester City 2 Manchester United 3 was the result of this five-goal thriller at the Etihad Stadium, Manchester. The first half belonged to the visitors, the second to the home team. The shock of the day came as Wigan Athletic was eliminated by lowly Swindon Town, three divisions below. Roman Pavlyuchenko scored one of Tottenham's three goals against Cheltenham.

Rooney (10 and 40') and Welbeck (30') put the visitors three goals ahead in the third round match of the FA Cup at City's Etihad Stadium. In the second half, City struck back through Kolarov (48') and Aguero (65'). City are contesting the controversial sending-off of club Captain Vincent Kompany after Rooney's first goal.