Pavlyuchenko to go to Anzhi Makhachkala? 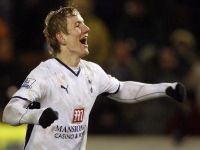 Tottenham Hotspur striker Roman Pavlyuchenko has not been in the starting line-up once this season and at the half-way mark, he is considering leaving the Premiership and going to the super-rich Russian Premier League side Anzhi Makhachkala, according to reports in the British Press.

The Daily Mirror quotes Oleg Artemov the agent of Russian striker, Roman Pavlyuchenko, who declared that until now, Roman has not considered returning to Russia. However, with the season now half over, the Russian star cannot get a place in the first team, being behind the duo preferred by team coach Harry Redknapp, Emmanuel Adebayor and Jermain Defoe.