Soccer: Friendly matches outside the EURO 2012 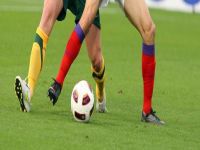 Among the friendly games played between the UEFA 2012 qualifying matches were Greece against Russia and England against world and European champions, Spain. Russia scored an early goal in Greece but the home side equalised, securing a 1-1 draw in a game between two teams already qualified for UEFA 2012 in Poland/Ukraine. However, we can draw some conclusions as to how Russia will play.

Roman Shirokov struck early, after two minutes, giving Russia the lead in Greece. His shot flew over Greek keeper Alexandreos Tzorvas, following on from a through-ball from Alan Dzagoev. Greece managed an equaliser on the hour, when Kostas Katsouranis headed in a corner.

What can we learn from this game?