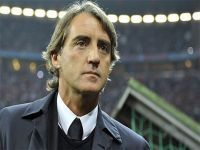 Sir Alex Ferguson says it was the worst match of his career both as a player and as a manager, after his Manchester United team was thrashed six-one at home by arch rivals Manchester city, who he described as "noisy neighbours". In Russia, CSKA won an 8 goal thriller away at Anzhi, while Zenit maintained the two-point lead at the top of the table.

With two games to go, it appears to be a two-team race which promises to go right to the line in a photo-finish. Zenit St. Petersburg have a two-point lead over rivals CSKA Moskva, while Dinamo is in third, four points behind CSKA but with a game in hand. Lokomotiv Moskva is the only other team with a mathematical chance of winning the championship, but it is extremely slim.

Zenit was 3-1 away winner at Rostov, while CSKA won a thriller 5-3 away to Anzhi. Spartak Moskva ended the championship campaign with a 4-0 drubbing of Tom Tomsk (Spartak cannot possibly win now and the best the team can hope for is an Europa League place). Dinamo Moskva plays Rubin and Lokomotiv visits Nalchik to complete matchday 28.

In England's Premier League, Manchester City look the part, whatever the experts say. Roberto Mancini's modest, hard-working yet humble hands-on approach has seen him build a team capable of tremendous attacking football, although on the night everything was right for a team that could not put a foot wrong. Manchester United, one player down, was only 1-0 down at the interval (Balotelli's first on 22), went down to 0-3 after Balotelli's second (60) and Aguero (69), pulled one back (Fletcher, 81) but as they pressed forward, Ferguson's players were punished by three late goals (Dzeko, 89 and 93) and Silva, (91). Chelsea FC also failed to take advantage of United's slip-up and the result is that City will remain in top spot for at least two more weeks.

The Mourinho magic in his second full season at Read seems to be working again, as his team temporarily occupied top spot, taking advantage of Barcelona's 0-0 home draw with Sevilla by thrashing sixth-placed Malaga 4-0 away. Cristiano Ronaldo answered those who claim he is out of form with a hat-trick. Levante's 3-0 victory away at Villarreal saw this Valencian team claim top spot. Rivals Valencia had a home draw with Athletic Bilbao.

Both Milan teams won and AC Milan is already in the top seven. Inter beat Chievo while AC Milan won 4-3 at Lecce. Udinese took advantage of Juventus' home draw 2-2 with Genoa to leapfrog to the top of the table with a 3-0 victory against Novara. Cagliari was held at home 0-0 by Napoli, Roma beat Palermo 1-0 and fellow Roman team Lazio came away 2-0 victors from Bologna.

Italian Serie A after 7 games

Bayern slipped to the first defeat of the season away at Hannover 1-2 but retains the number one spot. Formerly second-placed Moenchengladbach went down 1-0 at Hoffenheim and fell down to seventh place as the pack closed in. Dortmund won 5-0 at home against Koln, Stuttgart got a 2-2 draw away at Nurnberg, Bremen drew 1-1 at Augsburg and Schalke beat Bayer Leverkusen 1-0 away.

PSG again (2-0 against Dijon), followed by Montpellier (3-1 winner at Caen). Lille leap-frogged over Lyon to claim third spot (3-1). Rennes is in fourth after a 1-0 victory at Auzerre, while Toulouse was held 0-0 away by Breton side Lorient.

FC Porto remains top after a 5-0 thrashing of Madeira side Nacional with a positive goal difference of 17 goals after just eight games. Benfica shares the 20-point threshold but trails the arch rivals from the north by a 5-goal difference, coming away from Aveiro's Beira Mar with a 1-0 victory. Braga beat Feirense 3-0 and retains third place. In fifth, Maritimo beat Vitória (Setúbal) 1-0 in Madeira and fifth-placed Sporting CP plays Gil Vicente (from Barcelos) tonight.