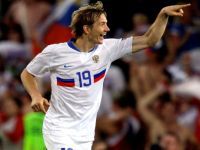 Among the soccer gossip taking place three and a half months ahead of the January transfer window, Russian striker Roman Pavlyuchenko's long-running saga at Tottenham Hotspur FC in the English Premier League may be coming to an end. Lokomotiv Moskva FC seems to he the front-runner to land the goal-scoring legend.

Pavlyuchenko has not received as many playing chances since he moved from Spartak Moskva FC in 2008 - he has scored 19 goals in 74 appearances. At twenty-nine years of age, and with Emmanuel Adebayor and Jermain Defoe sitting on the first team team sheet, it will be difficult for Roman Pavlyuchenko to establish himself in the first team, for which reason Spurs' manager Harry Redknapp might feel tempted to take the 13 million Euro that Lokomotiv is apparently willing to offer.

Another Tottenham Hotspur player who could be moving away is the midfield general Rafael van der Vaart, who is being closely followed by AC Milan in Italy's Serie A. AC Milan have had a disappointing start to the season, managing only one point from the opening two games. Travelling the other way, from Italy to London, but from Inter to Tottenham's chief rivals Arsenal FC, could be winger Ricky Alvarez.

Brazil's Neymar has sparked increased interest from the Premier League after announcing that he has not yet signed a pre-agreement with real Madrid for the 2012-2013 season.