Is the Tevez saga over? 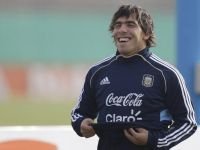 What is it with the city of Manchester, at least on the Eastlands side of the city (no pun intended)? While the players at United seem happy to stay for years, City's stars line up to slag off the city and its weather. Could it be the wind that blows harder from the Pennines, or could it be that City, however many billions they inject into the club, will never be United?

What I have just said will inflame many Manchester City fans yet what I have just said is what Eric Cantona has claimed just this week. One thing is spending billions on building teams, another is the long-term strategy of the club, which in United's case is built upon decades of history, or better, legend and fantasy.

In City's case, something is missing. It cannot be the history - United was founded in 1878, City in 1880. Then why? Why did City never manage to find that legend and fantasy mix over the years that their red neighbours managed to do?

The latest soccer gossip regarding Carlos Tevez is the possible move to Inter Milan, swapped with Maicon, the Brazilian defender...however Samuel Eto'o has asked Inter to be allowed to join City.

Let is see in a few years' time whether Eto'o also complains about the weather in Manchester, or whether he wants to join United.