Twist to the tale of Tevez

Twist to the tale of Tevez 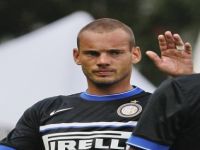 Carlos Tevez and Manchester City must have provided one of soccer's longest-standing soap operas. He wanted out, then stayed, then wanted out, was going to Brazil and now, it seems his final destination is Italy. This would be more in line with the reports that Mrs. Tevez favoured the lifestyle in Milan.

And Inter Milan pops up at the final hour just as FC Corinthians of São Paulo seemed set to swoop fore their ex-player, with a swap deal involving Tevez out and Wesley Sneijder in to the premier league. Tired of the saga is City manager Roberto Mancini who has said that he does not want Tevez at City any more and that if he did return it would be without his captain's armband.

Another move involving the Premier League and the Italian Serie A concern Lazio, Tottenham and Aston Villa FC, all of them interested in Miralem Pjanic of Lyon

Author's note: In answer to some readers' comments about the use of the word Soccer in these pieces, we have to remember that many of our readers are located in the USA and Canada, and since the word exists in British English, being taken from the expression AsSOCiation Football (SOCcer), then to avoid confusion with American Football, I use the word Soccer. I asked Timothy Bancroft-Hinchey, who is himself also a sports writer at Pravda.Ru and he said I was absolutely right.