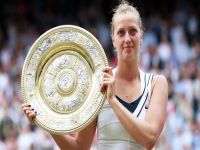 There is no doubt that Maria Sharapova is making a comeback after suffering from shoulder injury. Her semi-final in the French Open a month ago and her final appearance at Wimbledon today bear witness to that - however Petra Kvitova, the 21-year-old Czech, was the one who lifted the silver platter.

There is no doubt that Sharapova is making a comeback, but she is having problems holding her service games, dropping points through double faults.

It was two double faults in a row from Sharapova, 24, that shifted the balance of power decisively as it handed Kvitova a 4-2 lead, and although the Russian saved a set point with an ace it did not prevent her from losing the set.

Kvitova's power returns and shots down the line undid Sharapova and the young Czech ended the game on match point with her first ace. She later told the media that she thought it was the best match she had ever played.

Sharapova promised to be back and to hoist the winning trophy again in the near future.