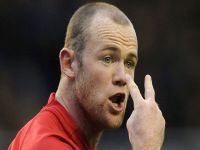 Manchester United FC have booked a place in the Champions League final, in London, against the winner of the Iberian showdown between Real Madrid and Barcelona. Winning 2-0 away in Germany, United all but crushed Schalke's hopes, breaking a 15-year jinx when playing with German clubs.

Unless Schalke 04 wins by a margin of three goals in England, Manchester United have booked their place in the final, in London's Wembley Stadium, against Real Madrid or Barcelona. Will it be a José Mourinho v Alex Ferguson final?

Tonight in the Arena AufSchalke in Gelsenkirchen, Schalke was beaten by two goals in two minutes - Ryan Giggs on 67' and man of the match Wayne Rooney on 69'. Manchester United had 16 shots against the home side's 8, 6 corners to 3 and 65% of possession (against 35%).

Schalke got off to a good start, Baunjohann forcing Van der Sar to make an excellent save after just 29 seconds but after three minutes, Rooney, in great form after listening to the Beatles before the game, led the charge against Neuer's goal, which the German keeper defended with tremendous class all evening.