Manchester United on the offensive 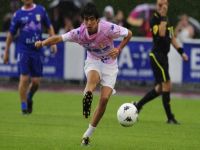 Manchester United Football Club, set to win its nineteenth Championship in England, looks to the future and plans an assault on the summer transfer market. Among the targets eyed by United's scouts is the 16-year-old Enzo Zidane. Remember that name?

Enzo Zidane is the son of Zinedine Zidane. At sixteen years of age, he is Real Madrid's best-kept secret - however the English giants have already eyed him up and Sir Alex Ferguson wants him. For now, Real Madrid had chalked up a loan deal with Belgian side Standard Liege - however a permanent move to United could change the plans.

Midfield player Enzo himself is in the middle of several battles. Firstly both France and Spain want him to play for them at international level - and Manchester United face stiff competition to sign the player from Italian Serie A team, Juventus. A lot may denend on advice from former France ace Zinedine Zidade, who played for both Real Madrid and Juventus.

United is also planning Operation Italy, to being Serie A players Alexis Sanchez (Udinese) and Marek Hamsik (Napoli) to Old Trafford. On the domestic front, Tottenham Hotspur's promising striker Gareth Bale is another player who interests the Premiership giants.