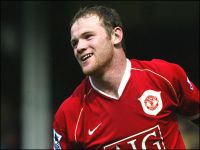 After the (almost) guaranteed passage of Real Madrid and Schalke 04 to the Champions League semi-finals, Wednesday's matches produced another semi-finalist, even before the second leg is played: Barcelona thrashed Shakhtar Donetsk 5-1 to book a place for the second Spanish team in the competition. Man. United and Chelsea have it all to play for.

Rooney (24') broke the deadlock and takes Manchester United into the second leg one goal up. Chelsea had more of the play (54% to 46%) and had 13 shots, 7 on target, to United's 3. However, the more efficient side was the one that scored.

The Spanish side outclassed brave Tottenham Hotspur FC 4-0 with goals by Adebayor (4, 57), Di Maria (72) and Cristiano Ronaldo (87). The statistics say it all - Real had 11 shots on target against Spurs' 1, 14 off target against 3 and 64% to 36% of ball possession. Tottenham were not helped by a Peter Crouch sending-off on 15' Gareth Bale had his moments but the Real tide was relentless from start to finish.

The London team have to score 5 against Real in the second leg. Realistically, Spurs' campaign is over - but this was the first time the team had reached the Champions League quarter-finals. Full marks to Harry Redknapp.

Inter got off to a flying start on 1' with a goal from Stankovic. Schalke replied on 17' (Matip). The Italian side went ahead on 34', goal from Milito, only for the Germans to enter the break level, the 2-2 coming from Edu on 40'.

After the interval, Schalke scored three more - Raúl Gonzalez scored after 53', Ranocchia scored an own goal on 57' and Edu got his second after 75'. Inter have a mountain to climb in the return leg in Germany, which Schalke needs to manage with a minimum of effort.