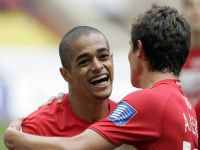 The three Portuguese teams pass through to the last 8 of the Europa League: FC Porto, Benfica and SC Braga, whose coach, Domingos Paciencia, outfoxed Liverpool's Kenny Dalglish. Russia's contribution now is limited to Spartak Moskva, after the elimination of CSKA and Zenit.

A brilliant result for Domingos Paciencia's Braga. A lesson in tactics.

The visitors scored after 14' (Lens). This goal was enough to win the tie.

After winning away by 3-2, Villarreal put the game beyond the reach of Bayer Leverkusen with goals from Santi Cazorla (33) and Rossi (61), while Derdiyok scored the goal of honour for the visitors on 82'.

Kolarov scored for Manchester City but it was not enough to reverse the result from the first leg in Ukraine. The home side had 14 shots against 7 and 11 corners to 4. However, despite the pressure the Ukrainians go through.

Benfica's Gaitán opened the scoreboard on 27' and Bodmer replied for the Paris team on 35'. 1-1 at half time. Benfice managed to block PSG's extreme pressure in the second half and owe their continuation to goalkeeper Roberto.

Zenit St. Petersburg won the game but lost the tie, having lost the first leg by 3-0. The goalscorers were Shirokov and Kershakov on 16' and 38'.