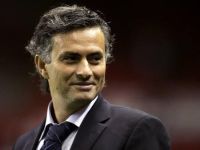 Manchester United, Inter Milan, Real Madrid and Chelsea FC unsurprisingly join Barcelona, Shakhtar Donetsk, Tottenham FC and Shalke 04 in the quarter finals of the Champions League. Three English, two Spanish and one team each from Germany, Italy, Ukraine go through to the next round.

After the 1-1 draw in France, José Mourinho's Real Madrid crushed their opponents tonight in Madrid with goals from Marcelo (37), Benzema (66) and Di Maria (76). Real Madrid's 15 shots against Lyon's 4 says it all.

Chelsea FC had a goalless draw in London but go through due to the 2-0 away win in the first leg in Copenhagen. The Londoners just had to manage the match but the statistics leave no doubt: 21 shots against 7, 10 corners to 3, yet allowing Kobenhavn to have the possession (55 to 45%).

A brace of goals by Hernández on 5 and 75' sank Marseille, whose goal came from an own goal by Brown on 82'. The home team justified Sir Alex Ferguson's claim that"We are a good side once we get the ball down and start playing". Manchester United had 10 shots, eight on target, compared with Marseille's ten shots (3 on target). Corners were six apiece and the home side had the advantage in possession, 57% to 43%.

Inter silenced the Fussball Arena in Munich with a goal from Eto'o (4), and then responses from Sneijder (63) and Pandev (88) after Bayern had pulled back through Gomez (21) and Muller (31). Bayern could not convert their pressure into goals (9 shots on target compared with 3), despite the fact that the Italians had slightly more possession (52 to 48%).

Goals by Willian on 18' and 58' and Eduardo (sub.) on 87' buried Roma who had lost the first leg at home by 2-3. The Ukrainian team has not lost at home since 2009. Mircea Lucescu's team won categorically against AS Roma; despite the score line it was a good game of football. The Ukrainian team had 10 shots, 6 on target and 4 off, while the Italians had eight (3:5). The home team had the advantage in corners (7:4). The home team also had the advantage in possession of the ball, 56% to 44%.

Tottenham held on to go through from the 1-0 lead away from the first leg in Italy. Spurs team coach Harry Redknapp called his players "amazing" as the London team gets into the last eight of the Champions League for the first time in its history.

Milan were more dangerous in London on Wednesday night, having 11 shots, three on target and eight off, while Spurs managed 6 (1;5). The Italians had 5 corners to 4 and a ball possession of 58% to 42%.

Valencia started the return leg away in Germany in the best way, with Ricardo Costa putting away the first goal of the match on 17'. The home side managed to come back still in the first half, Farfán scoring his first goal after 40',  and scored another two goals after the break to win the game, and the tie, comfortably. Gavranovic scored on 52' and Farfán got his second on 90+4'.