Redknapp: The hero of London 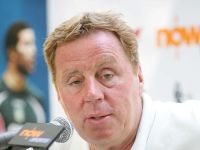 Harry Redknapp is the talk of the town in London as he leads Tottenham Hotspur FC into the last 8 of the Champions League for the first time in the club's history. The case for making him the next England manager after Fabio Capello gains ground...

Tottenham held on to go through from the 1-0 lead away from the first leg in Italy. Spurs team coach Harry Redknapp called his players "amazing" as the London team gets into the last eight of the Champions League for the first time in its history.

Milan were more dangerous in London on Wednesday night, having 11 shots, three on target and eight off, while Spurs managed 6 (1;5). The Italians had 5 corners to 4 and a ball possession of 58% to 42%.

Valencia started the return leg away in Germany in the best way, with Ricardo Costa putting away the first goal of the match on 17'. The home side managed to come back still in the first half, Farfán scoring his first goal after 40', and scored another two goals after the break to win the game, and the tie, comfortably. Gavranovic scored on 52' and Farfán got his second on 90+4'.

Goals by Willian on 18' and 58' and Eduardo (sub.) on 87' buried Roma who had lost the first leg at home by 2-3. The Ukrainian team has not lost at home since 2009. Mircea Lucescu's team won categorically against AS Roma; despite the score line it was a good game of football. The Ukrainian team had 10 shots, 6 on target and 4 off, while the Italians had eight (3:5). The home team had the advantage in corners (7:4). The home team also had the advantage in possession of the ball, 56% to 44%.