Champions League: Barcelona and Shakhtar through 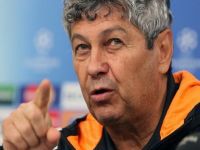 Goals by Willian on 18' and 58' and Eduardo (sub.) on 87' buried Roma who had lost the first leg at home by 2-3. The Ukrainian team has not lost at home since 2009. Mircea Lucescu's team won categorically against AS Roma; despite the score line it was a good game of football. The Ukrainian team had 10 shots, 6 on target and 4 off, while the Italians had eight (3:5). The home team had the advantage in corners (7:4). The home team also had the advantage in possession of the ball, 56% to 44%