Friendly games are friendlies, the perfect excuse for bad results and justifications for good ones. How  Russia loses with Iran and claims the result is acceptable defies logic. How can Russia become a force in Europe or the World with these mediocre results? 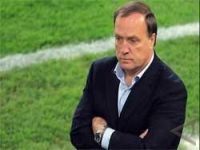 Russia's boys ate the grass in the game with Holland in the UEFA 2008 tournament. Russia's boys failed to qualify for the FIFA South Africa 2010 tournament (unluckily). Russia's boys start 2011 losing to...England? No! Germany? No! Spain? No! Brazil? No! Iran? Yes...

The goal was scored by Iran's Mohammad Khalatbari late in the game. All the talk about Russia's players is hype, if they played well, badly, if they created chances, or failed to deliver. Did Russia start well? Were the players unlucky? Did they start with a dreadful "tempo" but after "almost" hitting the post, they "ran out of steam"?

Talk the talk or walk the walk. Time for Russia's national soccer team to produce the goods. Who?

What next? Russia loses to Papua New Guinea?