Tottenham's Russian striker Roman Pavlyuchenko is certainly brightening up the winter transfer window. The latest club to be named showing interest is no less that Jose Mourinho's Real Madrid, desperate to find an experienced striker. 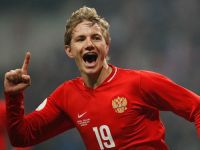 Pavlyuchenko fits the bill, since Real Madrid has made it clear to Mourinho that there is no money available to buy expensive new players in the January transfer window and he would be available on loan from Tottenham, where he does not get to play many matches, at least in the start-up line, and a move to Real Madrid would add value to the player, should Tottenham decide to sell him later on.

Moving in the other direction may be Lassana Diarra, the former Chelsea FC and Arsenal FC midfield player, for whom Tottenham will have to pay Real Madrid 18 million GBP.

Another player moving between Iberia and the Premier League is Benfica's defender David Luiz, who seems set to sign for Chelsea FC for 26 million GBP. The news in England is that FC Porto's Incredible Hulk, aka Givanildo Vieira de Souza, is a 30 million-pound target for Sunderland, however nothing in Portugal confirms this. To the contrary, FC Porto coach Andre Villas Boas has declared that any transfer deal for Hulk would not be probable.

Moving from England to France, is Emmanuel Adebayor, set to join his former club Monaco from Manchester City.