Isinbayeva comes back and sees love as the best diet

The Russian athlete Yelena Isinbayeva, world record pole vault champion, acknowledged she was "excited" and "motivated" on her return next month at the Meeting in Moscow, Russia. "I'm excited to return to competition," said Yelena, twice Olympic champion and owner of the world record, who is about to end the self-imposed temporary suspension of ten months. 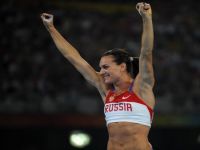 "I am motivated, fit and happy with my condition right now. My coach Vitaliy Petrov and I have worked extensively in accordance with a program to give me a solid foundation, so I'm very happy to return to competition and hope I enjoy it," she said in a statement released by the IAAF.

Isinbayeva, 28, has, in addition to her double Olympic gold, five world titles (three in indoor track and two outdoors) and a total of 27 world records.

But after she stumbled in the World Cup in Berlin (no mark) and then in Doha (fourth place) she decided to make a pause to recover from the eight hard years at the highest level of training and competition.

According to Yelena, she wants to regain her best form and win wherever she competes. "I will start in Moscow, then in Donetsk, in the meeting of Sergey Bubka, and one or two tests before the European Indoor (Paris)," she said.

"I hope things go well this season. The indoor season is relatively short, but I hope to make the best possible outcome," she added.

In an interview with Russian newspaper Zdorovie she stated that this recovery period allowed her to prove the things she had never tasted. She really liked the chocolate peeling. "I love chocolate, but I cannot eat it much because I am constantly preparing for competitions. So when I heard about this treatment, I ran right to do so. The skin then becomes soft and very delicate, and yet the whole body has the smell of chocolate. A pleasure and fun!" she said.

She also presented her revenue from the point of view of health and beauty. "First of all we need a positive attitude for the day. In the morning look in the mirror and say to ourselves: 'I am the most charming and attractive, all enchanted ... Very important is a good diet. Do not eat too much and always get up from the table with a slight feeling of hunger. And of course, love. First love ourselves, and following it, be able to able to love everything that surrounds us. Perhaps love is the best diet, we get more beautiful, and always feel pretty and healthy. "