Russian striker Roman Pavlyuchenko's stay at Tottenham Hotspur FC has been fraught with rumours of his leaving. However, it appears that his fellow strikers Robbie Keane and Peter Crouch appear more likely to leave while "Super Pav" stays, spurred on by his improved form and nine goals this season. 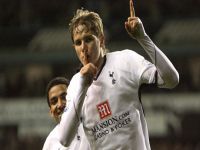 Both Midland clubs Birmingham City FC and Aston Villa FC are after Robbie Keane while Peter Crouch could be part of a deal to bring Newcastle United striker Andy Carroll to White Heart Lane as a striking partner for Pavlyuchenko. Crouch has also attracted the attention of Liverpool FC boss, Roy Hodgson. However, the London club has told the Russian striker to improve his English because his communication skills are not the best. His agent Oleg Artemov has declared that Roman can understand, people just have to speak slowly.

The letter T seems to have disappeared, along with the aspirated H, the vowels have taken on manic new identities, "I" becoming "oi", "E" becoming "ei" as in day, ("I mean" becoming "Oi mein") and as for the grammar, bend it like David "We done the job" Beckham.

Then the further one goes from London, the worse it seems to get. :Rolleyes: Good luck, Roman! (" 'Ere moit! Oi can lern yer Inglish fer a foiva!")

Another player who might find problems with the now-unintelligible Brit English is Ronaldinho, the Brazilian genius at AC Milan who has sat out the last nine games in Serie A on the substitutes' bench. The arrival of Antonio Cassano from Sampdoria may mean a January move for Ronaldinho, who has always stated that he would enjoy the experience of playing in the Premier League. Meanwhile the Brazilian defender Denilson (Arsenal FC) is being closely followed by Barcelona FC.

Another possible transfer in the January window will be the Portuguese Danny (currently playing at Zenit S. Petersburg) to Manchester United.